Westbound ramp could cost over $15 million

The lack of a complete interchange requires large trucks to cross town to get to 460 West or to businesses on East Third Street, coming from 460 East. This can cause congestion on Main Street. (Photo by Carson Reeher)

What is needed to get a westbound ramp at the U.S. Route 460 interchange east of Farmville?

While it’s widely agreed that a westward ramp is needed on the U.S. Route 460 Interchange located on East Third Street east of Farmville, solutions are lacking.

There is already a ramp leading to 460 East and an exit from 460 West to East Third Street. The addition of a westbound ramp and exit to 460 East would complete the bypass and help curb traffic.

“It’s up to the county, (because) it’s outside of town,” said Town Manager Gerald Spates. “If it was in town, we probably would have tried to seek funding or get some kind of VDOT funding to go ahead and finish it, but now what the county’s doing about it, I don’t know, since it’s not in our jurisdiction.” 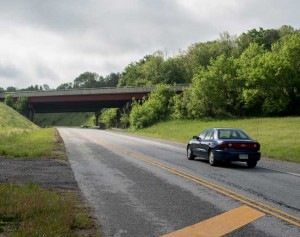 An eastbound ramp already exists at the interchange. Vehicles currently either take the eastbound ramp and then U-turn onto 460 West or use Milnwood Road or Main Street to get the the Farmville Road 460 Interchange where there is a westbound ramp. (Photo by Carson Reeher)

According to VDOT spokeswoman Paula Jones, in order for the project to be approved, “(Prince Edward County), working with its partners, would need to ensure that the proposed project was included in the VTrans Vision Plan and, in turn, the project would need to eventually become part of the Six-Year Improvement Plan.”

“There’s a lot of processes (the county) would have to go through,” she said.

According to Prince Edward County Administrator Wade Bartlett, 10 years ago studies were conducted and paid for by VDOT’s Rural Transportation Planning Grant Program and the county.

The Timmons Group was commissioned to conduct the study. “They developed conceptual plans and phasing alternatives for the construction of a full-access interchange at this location.” said Bartlett.

As a result of the study, it was found that the cost to construct a full-access interchange would be $12 million-15 million.

According to Jones, 10 years later that cost could be even higher as the price of materials, such as steel, has risen.

According to Bartlett, the project is a long-term goal for both the town of Farmville and the county.

“Both the county and the town adopted resolutions urging VDOT to recognize the need for the interchange and provide the necessary funding for this project,” Bartlett said.

“It’s really needed because anybody going westbound, going that way, has to (get on 460 East) and make a U-turn. It sends a lot of traffic down Millwood Road and down Main Street (to the 460 bypass on Farmville Road) because that way they can go westbound without any hassles,” said Spates.

“The last time I know that there was discussion was 10 years ago; it is not something currently in any VDOT-related plans,” Jones said.

According to Bartlett, “This project would be of great benefit to both the county and town, but neither have the financial resources to fund such an expensive project.”

Spates disagrees. “You know there had been plenty of opportunities to get it built, so I think with some of the VDOT programs, there’s programs out there where you can get the money. It’s just a matter of pushing to get the work done.“

“I think it definitely has an impact on the businesses (near) that 460 area,” said Spates.

According to Trey Steigman, vice president of development for Management Services Corp. (MSC), completing the 460 business interchange would help with access and bring more commercial business to that side of town.

“The business we have would benefit from that interchange,” he said.

MSC represents the developer of Sunchase Properties, which includes the Sunchase at Longwood apartments and the Shoppes at Sunchase shopping center.

“We’ve been out here for 15 years. It’s not stopping us from developing, but better access equals better opportunities,“ said Steigman.

“It gets brought up all the time,” Spates said. “The businesses (in) that area would love to see it, and I know the people on Milnwood Road would like to see the traffic come off Milnwood Road, using that westbound lane.”

Spates said he believes the project should be looked at before any other major projects begin, adding that members of the community interested in seeing the bypass completed “need to talk to the supervisors. That’s the key thing. The more people that get involved with it the better off they will be.”

The project could take 5-6 years to complete once decided on, according to both Jones and Spates.