‘The power of ideas’ 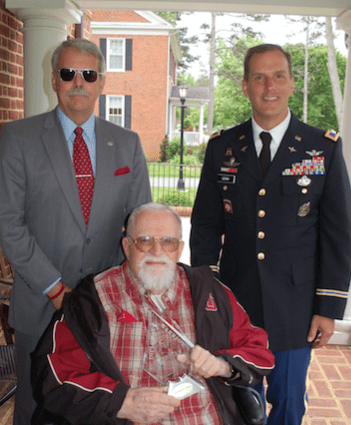 Retired Lt. Gen. Samuel V. Wilson was honored recently by Hampden-Sydney College (H-SC) and the U.S. Joint Special Operations Command (JSOC) for his contributions to the nation’s intelligence and counterterrorism efforts around the world.

The presentation was held at the Wilson Center for Leadership on H-SC’s campus.

The award recognizes the author of an original article that makes a significant impact upon the study of counterterrorism, according to Rucker Snead, who serves as the director of the Wilson Center.

Both Snead and Col. David Leach, director of J37 and training at JSOC, presented Wilson with his accolades.

Wilson, who completed his active military career in the fall of 1977, served as director of the Defense Intelligence Agency from May 1976-August 1977, and is known for his work in doctrine for low intensity conflict, where he coined the term counterinsurgency, or COIN. Wilson is credited for helping establish the Delta Force, the Army’s top counterterrorism unit.

“This morning the counterterrorisim community honors Lt. Gen. Sam Wilson for his distinguished service and continued contributions to the fight against the global war on terrorism,” Snead said. “The JSOC Lt. Gen. Samuel V. Wilson Writing Award was established by the JSOC Center for Counterterrorisim Studies. As an organization that continually seeks to learn and improve, the center elevates innovative and practical approaches to national security, specifically to counterterrorist threats to the United States.”

The awards that have been handed out in the past two years were on the topics of “What does it take to be a true Muslim?  Implications to efforts to counter Al Qaeda extremist narrative,” and “ISIS and social media: The Combatant Commander’s Guide To Isis and Social Media Campaign.”

Having named the award in Wilson’s honor, Snead said that JSOC honors him as a “warrior, scholar and a diplomat.”

Snead noted H-SC’s renowned and influential rhetoric program, connecting it with the award.

“The development of the doctrine that we still use today … Today if you were to go to Fort Bragg … the work that Gen. Wilson has done is evident there today. It’s critical to what’s going on in the national operating environment,” he said.

Leach said that Wilson had performed “incredible, incredible work” for the United States.

“We will undoubtedly be successful … because of the work you have done, your service to our country and the work that you continue to do through your beautiful campus …,” Leach said, adding that the power of the award was “incredible” and Wilson’s legacy will live forever.

Wilson, who prefaced his comments by thanking everyone for being part of the event, said, “It ain’t about Sam Wilson. It’s about something much more important … This occasion, as far as I’m concerned, is about the power of ideas. Power of ideas.”