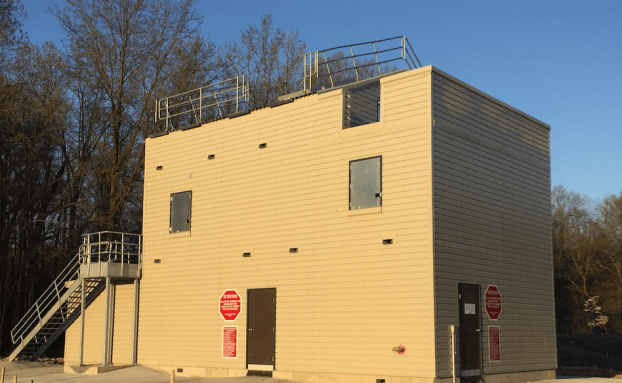 The Farmville Volunteer Fire Department and other volunteer firefighters across the region are welcoming increased training opportunities with the completion of the Farmville Regional Fire Training Center.

According to Farmville Fire Chief Andrew Goss, the building will be used for training by simulating a burning building.

According to a press release from the Town of Farmville, “this state-of-the-art facility will serve a vital role in training for the Farmville Fire Department and surrounding jurisdictions. Training opportunities will include hose line, search and rescue, forcible entry, technical rescue and fire suppression.”

“As chief of the department, you always look for better ways to prepare your members for the challenges they face,” Goss said. “There is no better way for us to meet those challenges in training with live fire exercises. I am very pleased with the design and layout of the building and the opportunities that we will have now with other companies that we work with on a regular basis. It’s a great asset to the area.”

Farmville Town Manager Gerald Spates previously said the building was funded from a grant provided by the state’s Department of Fire Programs.

“Burn building grants are provided for the construction, renovation or repair of burn buildings in the commonwealth of Virginia,” the department stated.

The Farmville Volunteer Fire Department received a $450,000 grant for the project. According to Goss, the approximate cost of the project was $500,000.

The Department of Fire Programs stated award amounts are based on the square footage of a training center.

The Farmville Regional Fire Training Center is located in Farmville off of Industrial Park Road. There is a also burn building in Buckingham County on Route 56 off of U.S. Route 60.

The Judith Randolph-Longwood Chapter of the Daughters of the American Revolution (DAR) has awarded its first-ever scholarship to benefit a... read more