Police receive thanks from the community

In recognition of National Police Week, the Farmville community has given back to the town’s police department.

The department’s Citizen’s Advisory Board, consisting of business owners and town residents, donated a plethora of mugs, meals, gift cards and certificates to each member of the force this week.

In addition to each police officer receiving a bag full of gifts from businesses and donors, meals have been brought by restaurants every day to the police department — sometimes twice.

Many members of the advisory board are graduates of the department’s police citizen’s academy course, one that offers insight into law enforcement operations.

“From my understanding of talking with the officers who have tenure here, this is the largest event they can recall,” Police Chief Curtis Davis said of the group’s donation and recognition. “Historically, there have been smaller events and appreciation, such as food or cards, but, by far, this is the most organized effort in memory.”

The donations humbled the officers, he said. “It is very difficult to find the words to describe how deeply we appreciate this recognition.”

Mosher, who owns Walker’s Diner on Main Street in downtown Farmville, says the idea to thank the officers came about six weeks ago. “We were quite impressed in the end with the response we were able to get from the community.” 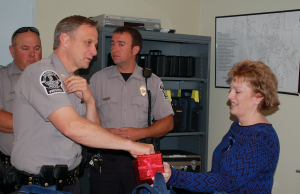 About 12 gifts are inside each bag for each officer, Mosher said. Schoolchildren also presented gifts and thank-you notes to the officers.

“We purchased stainless-steel mugs with the blue line (and) Farmville Police Department logo on it,” she said. “Each officer is going to get a special gift.”

“I really feel great about it,” she said, “and I’m sure the rest of the ladies feel equally as good to take the time to give back, because, you know, really, they put their life on the line every day … The world is so different now.”

“I hope every year that we can do more and more,” Mosher said of the event.

Mosher said strangers in her business donated money to the cause.

“I had a stranger in the diner (who) heard about it and just said, ‘I want to give $5 because I think it’s wonderful.’”

“This is a wonderful community with strong public servants, not just here at the Farmville Police Department but also in our sheriff’s department, state and university police departments. We are blessed to have all these people who are willing to serve,” Davis said.

He said he thinks the event and week were “a good reminder that at times we can turn off the national news and look no further than our own community to evaluate how we are perceived. When you come to work every day and you believe that you may be viewed by some action of a person you have never met, it is difficult. This reminds us that we have a chance to control our own destiny in our careers by how we perform as individuals and not simply because we are part of a profession.”

Perception works both ways, he said.

“…It reminds us that we also need to see people as individuals and never get caught up in assuming public sentiment. This is how we will continue to build relationships and avoid making assumptions about each other.”

“We feel good about how it all turned out,” Mosher said.