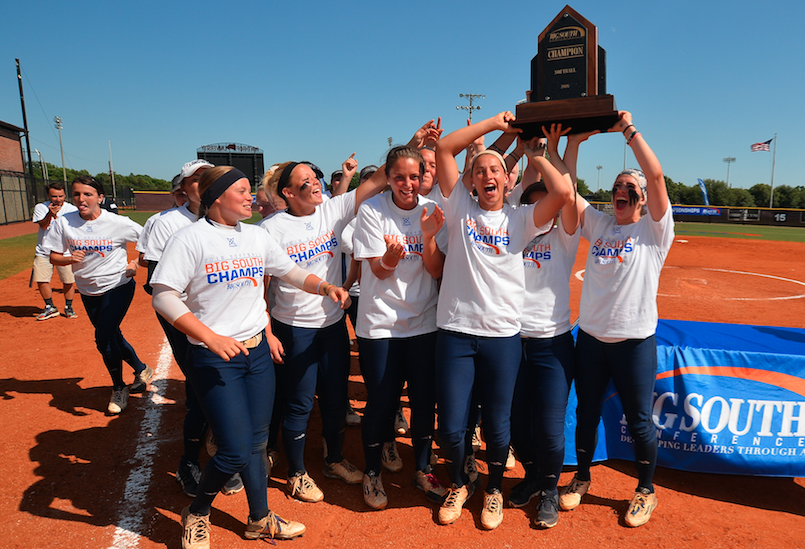 Longwood University’s softball team left no doubt who the champions of the 2016 Big South Conference Tournament were on Saturday.

Freshman pitcher Sydney Gay gave up only one hit and the top-seeded Lancers rained down 14 hits — including three home runs — upon Campbell in the tourney title game to cruise to a decisive 10-0 run-rule victory.

The win completed Longwood’s remarkable comeback from the losers’ bracket in the tournament after being upset 5-2 by the fifth-seeded Fighting Camels on Thursday in the second round.

By winning the tourney, the Lancers (38-18) qualified for the NCAA Tournament for a second consecutive season and were selected Sunday as the third seed in the Harrisonburg, Regional. They will play the University of North Carolina (31-23) on Friday at 2 p.m.

The Lancers, who repeated as both Big South regular season and tournament champions, started the conference tourney with a 13-5 run-rule win over Winthrop before falling to Campbell and then reeling off four straight victories.

“We played two really good games against Coastal (Carolina), and then coming out today and playing another good game, it was just nice for us to really kind of have that kind of momentum and play that way at the end of the tournament,” Longwood coach Kathy Riley said.

“I thought it was a tough road for us to get back to the championship because of the amount of good softball that we would have to play, but definitely I was not surprised by the resilience or their approach or how calm they were in the face of adversity,” Riley said.

Shining brightly for Longwood was Gay, who pitched her third straight complete-game shutout of the tourney in the title game.

“It’s pretty cool being a freshman and actually winning the tournament,” she said.

“I came out there, and I knew what I had to do, and I told coach I was ready to pitch whenever she needed me.”

Gay (18-6) was named the Big South Tournament MVP. She did not allow a single run in five appearances and four starts in the tourney, finishing with a 4-0 record. In 24.2 innings, she threw 24 strikeouts and opponents hit just .131 against her

“Good players make coaches look good, and the reality is that Sydney gave us an opportunity to get relaxed as an offensive club by going out there,” Riley said.

“Each one of her appearances this weekend, she pitched in dominating fashion.”

Sophomore Glenn Walters starred offensively for the Lancers, hitting a two-run home run in the second inning to get her team on the scoreboard. She added a solo homer in the fourth to make it 9-0.

“I just think it was easy for me to get in there and tell myself to help the team, because I really wanted to win to get another ring this year,” she said.

It was both the Lancers’ third conference tournament title and their third NCAA berth in four seasons.

This is the first time in program history that they have been named as the three seed in an NCAA Regional.