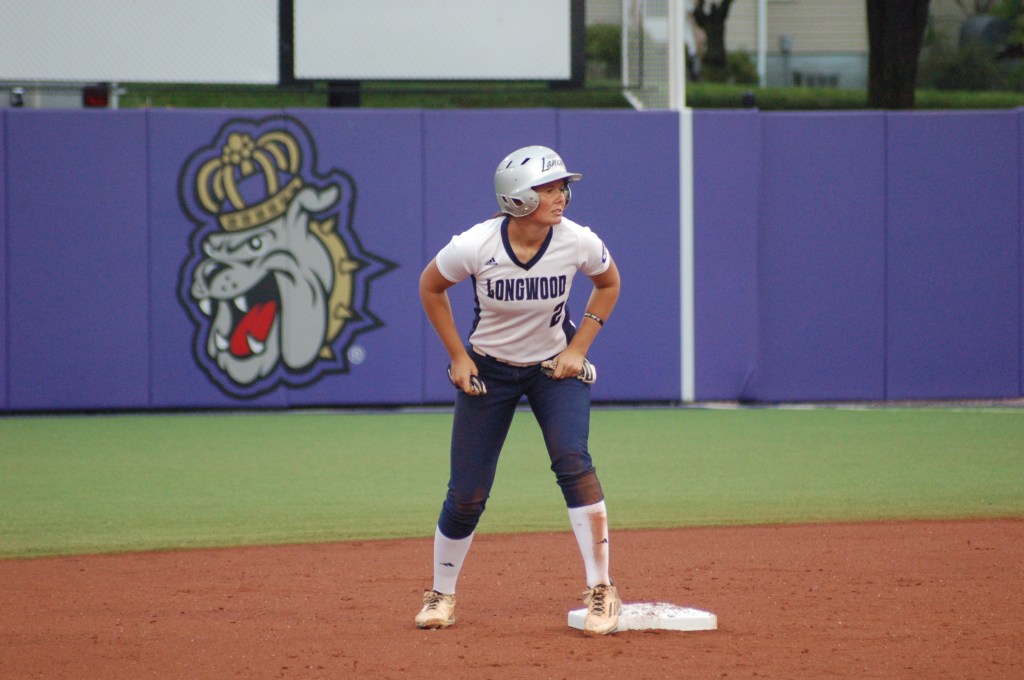 Longwood University sophomore Kelsey Sweeney looks to advance to third during the Lancers’ 5-4 upset victory over the University of North Carolina on Saturday evening in the 2016 NCAA Harrisonburg Regional. (Photo by Titus Mohler)

Longwood University’s softball team made Saturday a landmark day in the history of the program by tripling the number of wins it has ever achieved in the NCAA Division I Tournament and giving itself a shot at a regional title.

It took nine innings, but the Lancers, the three seed in the 2016 NCAA Harrisonburg Regional, finally got the better of the regional two seed University of North Carolina. Longwood redshirt freshman Karleigh Donovan hit a walk-off RBI single about two-and-a-half hours after the game’s first pitch to help her team achieve a 5-4 victory, avenging the Lancers’ 6-4 NCAA Regional loss to the Tar Heels on Friday.

The Lancers (40-19) advance to face host and national seventh seed James Madison (48-4) on Sunday at 2 p.m. If Longwood wins that game, it will need to play the Dukes again at 4:30 p.m. and win to complete its comeback from the losers’ bracket, capture an NCAA Regional championship and advance to the Super Regional against the Baton Rouge Regional winner.

“There’s certain humps that you have to get over in a regional,” Lancers Head Coach Kathy Riley said, “and the fact that we lost our first game in the tournament, came back and won two and put ourselves in a finals — this is our first experience in a finals — we understand the magnitude of playing JMU and how good they are, but we’re just happy to be there right now.”

This season, Longwood had faced the Tar Heels (32-25) twice before Saturday, losing 5-3 in a regular-season showdown at home on March 15 and then falling on Friday.

Riley said the difference that helped get her team past UNC on Saturday was a calm feeling in the dugout.

“It really happened in the Princeton game,” she said. “The first three or four innings, I felt like we were a little tight, and then all of a sudden, the last three innings, I thought we really played together, kind of similar to what we had played during the conference tournament. So after that game, I felt like this approach in this game was much more of what we wanted — very team-oriented. We talked about it, about people not worrying about whether they got a hit or didn’t get a hit. We just needed to play together.”

Donovan pointed to offense as the key to upsetting the Tar Heels.

Donovan was key to both of Longwood’s victories on Saturday, hitting a home run in the fourth inning against Princeton to tie the game 1-1 and going 2-for-5 with the game-winning RBI against UNC.

“It’s great to be a part of it, and I couldn’t ask for more from the team or anything else,” she said of the Lancers’ third NCAA Division I Tournament win and her big role in it. “I’m just really happy.”

Riley said, “We talk a lot about hitters that have a knack and a naturalness about understanding what they’re doing with their swing, and Karleigh’s one of our two or three best hitters that we have on our team that really understands how to make adjustments in at-bats, while they’re going on, or from one at-bat to another.”

Longwood freshman pitcher Sydney Gay improved her season record to 20-7, earning the wins in both games on Saturday. She shared time in both contests with junior Elizabeth “Biz” McCarthy.

Riley noted using both girls in the circle was key to keeping the Tar Heels off balance.

“I think it was a good idea to rotate innings with me and Biz, because we both have different pitches,” Gay said. “I made sure I had to keep it off the plate and just make sure my spin would work, (that) my movement would make them reach for it.”

The victory makes this the third Longwood team that Riley has led to a 40-win season, all of which have come within the last four years with contributions from the current senior class.

“We’ve made a lot of memories this year, and I think we celebrated more this year the opportunity to play good softball with this group than we have in a long time,” Riley said. “When they were freshmen, it was all about making them good. And now to see them gain experience and really lead us this year, any reward that they get makes me feel great.”