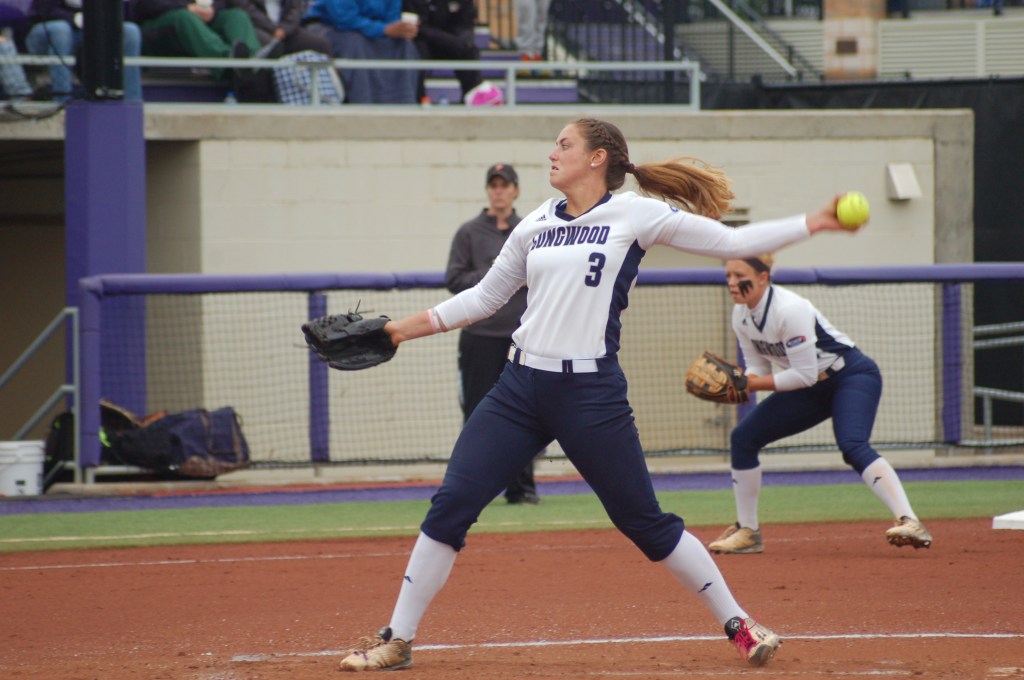 6:22 p.m. – Carly Adams get a clutch catch in shallow right field, and that’s the ball game. Longwood wins 2-1 to advance to play UNC in another elimination game, scheduled to start at 7 p.m.

6:19 p.m. – Longwood’s first error of the game allows a runner to reach first, and then a hesitation allowed the other runner on base to reach third with no outs on the board. The Lancers are in a dangerous spot right now, holding onto a 2-1 lead. Now Princeton’s runners are on second and third, but a pop up leads to the Tigers’ first out. Then a spectacular diving catch by Glenn Walters charging up from center field makes it two outs.

6:13 p.m. – Krista Kelly is walked, but she doesn’t get past first base as we head into the seventh inning. Score: Longwood 2, Princeton 1

6:05 p.m. – The Tigers left one on base in the top of the sixth. The Lancers appeared to have an extra bounce to their step as they went out to warm up before the start of the inning, and now they are likely chomping at the bit to add to their lead and live to play at 7 p.m. in a rematch against UNC. Score: Longwood 2, Princeton 1

6:03 p.m. – The Lancers filled the bases in the bottom of the fifth, and then another walk brought home Emily Murphy. We’re now two outs into the top of the sixth. Score: Longwood 2, Princeton 1

5:50 p.m. – Emily Murphy hits a nice double just inside the left field line with two outs on the board. Then, Kaylynn Batten is walked, and the Tigers make a pitching change. Score: 1-1

5:44 p.m. – Now Sydney Gay has taken over for McCarthy in the circle. Justina Augustine makes a great catch in foul territory past the right field line to end the top of the fifth inning. Score: 1-1

5:40 p.m. – The Tigers get out of the fourth inning without allowing any more Lancer runs. Longwood now has a 4-3 edge in hits, while both teams have played error-free softball so far. McCarthy remains in the circle for Longwood in the top of the fifth. Score: 1-1

5:36 p.m. – The Lancers have had difficulty stealing second, as Glenn Walters got tagged out there, slowing some of Longwood’s momentum following the home run. However, Kelsey Sweeney hit a ball against the left field fence, good for a double to keep things rolling for the Lancers, though there are now two outs on the board. Now, Mariah Ellis is walked to put runners on first and second. Score: 1-1

5:30 p.m. – Longwood freshman Karleigh Donovan has evened things up with a solo home run that went over the right field fence with one out in the bottom of the fourth. Score: 1-1

5:27 p.m. – In the first at-bat of the fourth inning, Princeton hits a home run to left center to give the Tigers a 1-0 lead over Longwood. Shortly thereafter, Lancers freshman Sydney Gay began warming up in the bullpen. McCarthy and company successfully get Longwood to the bottom of the inning without any further runs.

5:11 p.m. – It’s a chilly afternoon in Harrisonburg, where it rained during the morning. Spectators packed in the stands behind both dugouts have jackets, and many players sport long sleeves. The score is still 0-0 between Longwood and Princeton as we begin the bottom of the third.

5:07 p.m. – Longwood’s Carly Adams, who was strong on defense in Friday’s game against UNC, continues that trend today against Princeton. She fields a ball and tags first base herself for the Tigers’ first out of the third. Score: 0-0

5:03 p.m. – Longwood has made it to second base in the bottom of the second, but no further. We head into the third inning. The Tigers and Lancers have one hit apiece. Score: 0-0

4:56 p.m. – The Lancers got runners on during their first time on offense, but no one could advance past first. Princeton has had more success offensively, but McCarthy and the Longwood defense keeps the Tigers off the scoreboard in the second inning as they leave two runners on. Score: 0-0

4:38 p.m. – The Big South Pitcher of the Year Elizabeth McCarthy is starting in the circle today against Princeton. LU assistant coach Kayla Miller just met briefly with McCarthy on the field to discuss some element of the game with two outs on the board in the top of the first. The Lancers got two outs early before the Tigers found a hole between first and second for a double. Nothing comes of it, though, as a pop fly is caught to end the top of the first.

4:19 p.m. – The Longwood University softball team is on the field in Veteran Memorial Park warming up before its elimination game against Princeton in the NCAA Harrisonburg Regional.