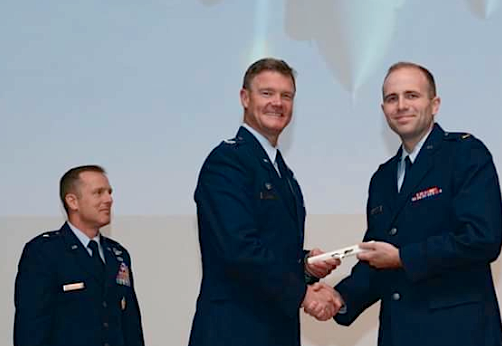 Russell Lee, right, receives his wings from Col. Thomas B. Shank, center, as Brig. Gen. John A. Cherrey looks on.

Lee, a 2010 graduate of Prince Edward County High School, received his appointment to the U.S. Air Force Academy in 2010. His congressional nomination was from then U.S. Rep. Tom Perriello.

Lee graduated as a second lieutenant with a Bachelor of Science in Systems Engineering in 2014. His extensive pilot training in Del Rio, Texas, lasted about a year. On March 28, Lee was sent to Holloman Air Force Base in New Mexico to train on the F16.

“Russell’s dream came true,” a family spokesperson said. “Russell has wanted to be a fighter pilot since childhood.”