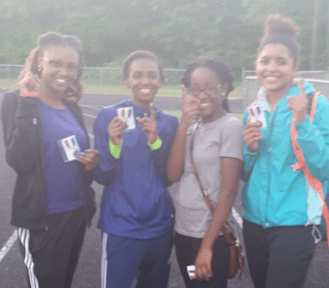 The Cumberland County High School girls track and field team was triumphant at the Group 1A Conference 42 Outdoor Track and Field Championships on May 18 in Charles City.

The Lady Dukes finished with 158 points, well ahead of second-place Middlesex, which had 118.

The Cumberland boys team finished third, generating 87 points, while Middlesex won with 146. The Dukes were led by Timothy Jackson, who placed first in the shot put and discus throw.

Prince Edward County High School’s boys and girls teams each took third in the Group 2A Conference 34 Outdoor Track and Field Championships on May 18 at Prince Edward.

The Eagles produced 78 points, while the Lady Eagles finished with 62. Brunswick won both the boys’ and girls’ sides, generating 113 and 165 points, respectively.

Montiera Wynn was victorious in the 400, while Lionel Bowles took first in the 400 for the boys.

The Buckingham boys team had only three athletes competing and did not generate any points.