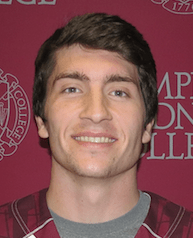 H-SC lacroose player Jake Koferl (Huntersville, N.C./Lake Norman) was selected to participate on the Division III South team for the 75th USILA/Nike North-South game. The annual contest serves as a senior all-star game and was played on Friday at Cabrini College in Radnor, Pa. Koferl was named First-Team All-ODAC in early May, and he had a career-best year, finishing with 51 points, 34 goals and 17 assists.

His 51 points was the third-best for all ODAC midfielders and the 10th most by a midfielder in school history. Koferl has contributed at least one point in every game and three-plus points in 11 games.

He tied a career-high with four points in five games, including against Lynchburg and in the ODAC Tournament vs. Guilford. Koferl has contributed 124 points, 81 goals and 43 assists over four years. His 124 points are the 20th most in H-SC history and eighth for midfielders.