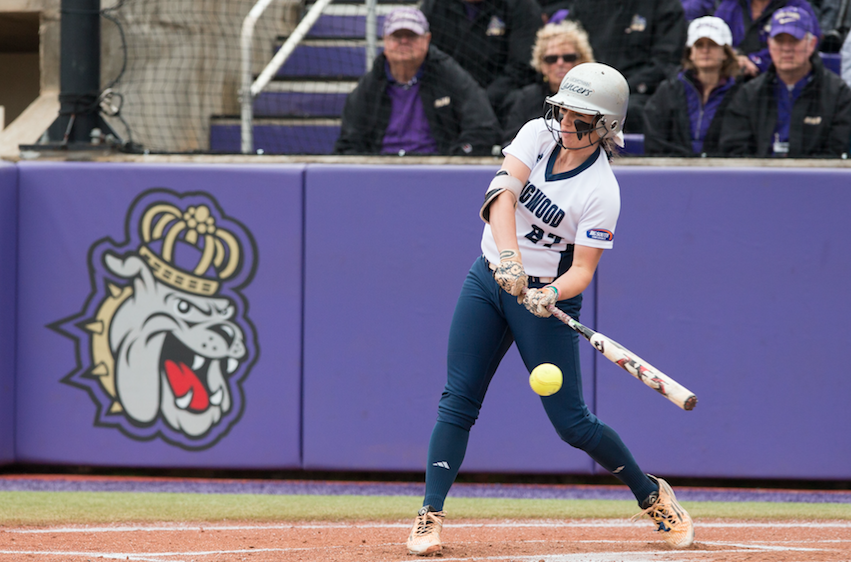 The Longwood University softball team’s 2016 season ended Sunday afternoon in the NCAA Harrisonburg Regional final with a 5-1 loss to national seventh seed and host James Madison University, but a loss is hardly how the season will be remembered for the Lancers.

They entered the year with two NCAA Division I Tournament appearances. Now they have three.

They entered the year with one NCAA Tournament win in the school’s Division I era. Now they have three.

They entered the year having produced two 40-win seasons during Head Coach Kathy Riley’s tenure. Now they have three.

They entered the year with two Big South Conference Tournament championships. Now they have three.

The list could go on, with higher numbers involved, but it is noteworthy that the success listed above has come within the last four years. Longwood softball is a program on the rise, and the ascent continued this year.

The Lancers (40-20) enjoyed playing closer to home this year compared to their two previous tournament appearances, which were in Knoxville, Tenn.

“Not only do I think being close to home helped us, but I think the fact that we won a game last year in a regional put us in a position to be more comfortable this year, too,” Riley said. “So I think we were pretty relaxed, really, and I felt that we were pretty comfortable going into the final game. I did not feel anxiety or a lot of tension.”

Senior shortstop Emily Murphy agreed, adding that “winning a game last year against Virginia Tech boosted our confidence up. Coming here, we beat (the University of North Carolina), and we were just hungry for the next game after Princeton, and definitely, I think we are even moving more forward.”

The Lancers earned the three seed in an NCAA Regional for the first time this season.

After a 6-4 loss to the regional two seed, UNC, on Friday, Longwood made its way through the losers’ bracket on Saturday, eliminating Princeton 2-1 and UNC 5-4 in a rematch that went nine innings.

Though James Madison was a heavy favorite on Sunday, the Lancers played with heart and showed themselves capable of hanging with one of the best teams in the country.

Longwood took a 1-0 lead in the bottom of the third inning when freshman Kaylynn Batten hit an RBI single that drove in freshman Jessica Smith.

Freshman pitcher Sydney Gay and the Lancer defense kept the Dukes off the scoreboard until the fifth inning, and JMU did not gain its first lead until the sixth.

“It’s an amazing job what Kathy Riley has done with that Longwood program,” JMU Head Coach Mickey Dean said after the game. “(I’m) very proud to have two teams from Virginia playing in the finals here in the regionals, extremely proud of that.”

Gay (20-8) ended up taking the loss in the circle, but she still played well, throwing six strikeouts and allowing four hits, two runs and only one walk in 5.2 innings.

The game marked the end of outstanding collegiate careers for the Lancers’ three seniors: second baseman Carly Adams, Murphy and first baseman Jamie Barbour, who has been sidelined due to injury since the second round of the Big South tournament.

“I really remember them a lot more for this year than any, because I saw so much growth in them,” Riley said of the trio.

“They allowed me to make mistakes, (Assistant Coach) Kayla (Miller) to make mistakes, their other teammates to make mistakes, but they still were buying in with what we wanted to do as a group, and it became one of the most enjoyable teams I’ve ever coached because of that. And if I said, ‘Really, how could I sum up how this team was’ … There was tremendous respect for each other within the entire group, so it was easy to watch them work on a daily basis because of that.”

Summing up a career alongside her fellow seniors, Murphy said, “It’s been the best four years that I’ve ever had. Playing with Carly and Jamie, it’s been a pleasure. Growing that friendship and working all of those years, me and Carly working the middle (infield) area, and then there’s Jamie (at first base), and this year we got to do the 1-2-3 in the batting lineup. And it’s been a lot of fun, working hard and working towards the same goal.”