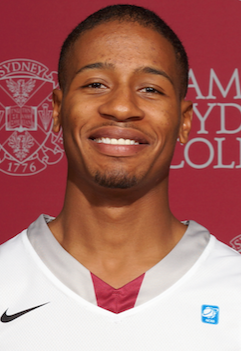 At this year’s commencement ceremony, Hampden-Sydney basketball’s Mike Murray ‘16 (Norfolk/Norfolk Christian) was awarded one of the highest honors bestowed at graduation when he was named the 2016 winner of the Gammon Cup. Murray is the 32nd basketball student-athlete to win the Gammon Cup.

The Gammon Cup, given in memory of Dr. Edgar G. Gammon, a Hampden-Sydney graduate of the Class of 1905, pastor of College Church from 1917 to 1923, and president of the college from 1939 to 1955, is awarded to the member of the graduating class who has best served the college through character, scholarship, and athletic ability.
Murray was a stellar basketball player, being named a team captain for three seasons. He was tabbed All-ODAC two times and was honored as a Third-Team All-Region student-athlete by D3hoops.com during his junior campaign.

He broke the school record for career assists with 433 while setting the single-game record with 14 against Eastern Mennonite on Jan. 17, 2015. He also ranks seventh in career steals with 175 and scored 1,178 points to rank 26th. Additionally, he is a two-time team MVP.