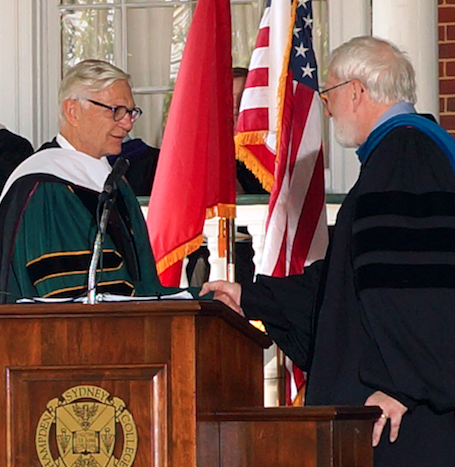 W. Taylor Reveley III, president of the College of William and Mary and father of Longwood University President W. Taylor Reveley IV, not only gave the commencement address but was awarded an honorary Doctor of Humane Letters. With Reveley is interim President Dr. Dennis Stevens, right.

Hampden-Sydney College celebrated commencement on Sunday, marking the conclusion of the college’s 241st year. The rain held off, allowing 236 seniors to receive diplomas in the sunshine on Venable Lawn.

W. Taylor Reveley III, president of the College of William and Mary and father to Longwood University President W. Taylor Reveley IV, not only gave the commencement address but was awarded an honorary Doctor of Humane Letters in recognition of his contributions to the life of the mind, distinguished service and strong commitment to public service.

Reveley III is the son of the former president of Hampden-Sydney, W. Taylor Reveley II.

“Now. I realize the rigors of Hampden-Sydney may have taken a real bite out of your confidence during your early months as a freshman,” the elder Reveley told the graduates. “But during the whole of your time on campus, while you were successfully doing what it takes to graduate, I believe your time at Hampden-Sydney built your competence and confidence, each growing year by year in step with the other.”

Several faculty and staff were honored with various awards as a part of commencement. Dr. Julia Palmer, associate professor of modern languages, was the recipient of the Cabell Award for outstanding classroom teaching. Jason M. Ferguson ‘96, director of admissions, was given the Robert Thruston Hubard IV Award for active devotion and service to the college and her ideals.

The Thomas Edward Crawley Award, awarded to the professor most distinguished for devoted service to the ideals of Hampden-Sydney and the education of her sons, was given to Saranna Robinson Thornton, professor of economics. The Algernon Sydney Sullivan Medallion, given to one who is conspicuously helpful to and associated with the institution in its effort to encourage and preserve a high standard of morals, was awarded to Mrs. Eunice Ward Carwile ’92.

The final award was the Senior Class Award, which was given to Dr. Lowell T. Frye and Dr. Elizabeth J. Deis for their contributions to the college, its students and the community.

The Class of 2016 also presented the college with a check for $7,145 towards a scholarship in honor of Coach Ray Rostan, who is retiring from his position as head lacrosse coach.