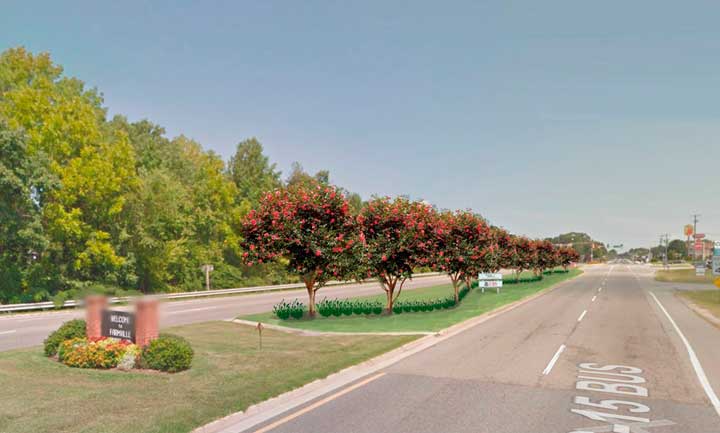 An artist’s rendering of a proposed ornamental garden on U.S. Route 15 Business is one of the eight FERN projects the town hopes to complete prior to the vice presidential debate. This will be the largest of the proposed gardens and will feature space for up to two sponsors.

The Town of Farmville’s FERN (Farmville Enhancement of Roads and Neighborhoods) project is underway and sponsorships are being accepted for projects.

According to a town press release, “FERN aims to beautify the major entranceways to town with professionally designed streetscapes sponsored by local businesses, groups or individuals.

Sponsorship will include a prominently placed sign featuring the participating business, which will remain in place for five years.”

Harvey Design Land Architects of Lynchburg will be responsible for implementing the project.

The firm has designed similar roadways projects for localities such as Lynchburg and Appomattox, stated the release.

“The ball is certainly rolling on this project. The FERN project’s proposed sites have to be submitted to VDOT for approval. We anticipate quick approval,” said Town Councilman and FERN Chairman Dan Dwyer.

The release stated 34 gardens are proposed and the locations of the gardens will include a variety of sites on West Third Street, the median area of U.S. Route 15 South, close to the intersection of the U.S. Route 460 bypass.

At a January meeting of the Farmville Town Council, President of Harvey Design Land Architects Proctor Harvey said the donation is a one-time fee which covers the leasing of a chosen garden location for a period of five years.

He said the fee would generally cover the implementation and maintenance of the garden.

The release stated that phase one of the project will include eight garden spots.

“The town is preparing necessary details so we can bid out the installation and maintenance of the garden spots,” Dwyer said.

The goal is to be fair to all businesses, groups and individuals so that all have equal opportunity to sponsor the first eight gardens. The FERN committee is very excited.”

The release stated that VDOT has already provided general approval, however, each additional garden must be approved.

Garden construction is currently scheduled to begin in July and August.

“We’re looking forward to getting the project underway,” said Spates.

He said the project will help to beautify the town’s entranceways.

Sponsorships will be accepted until May 31 and more information can be obtained by contacting Spates at (434) 392-5696.