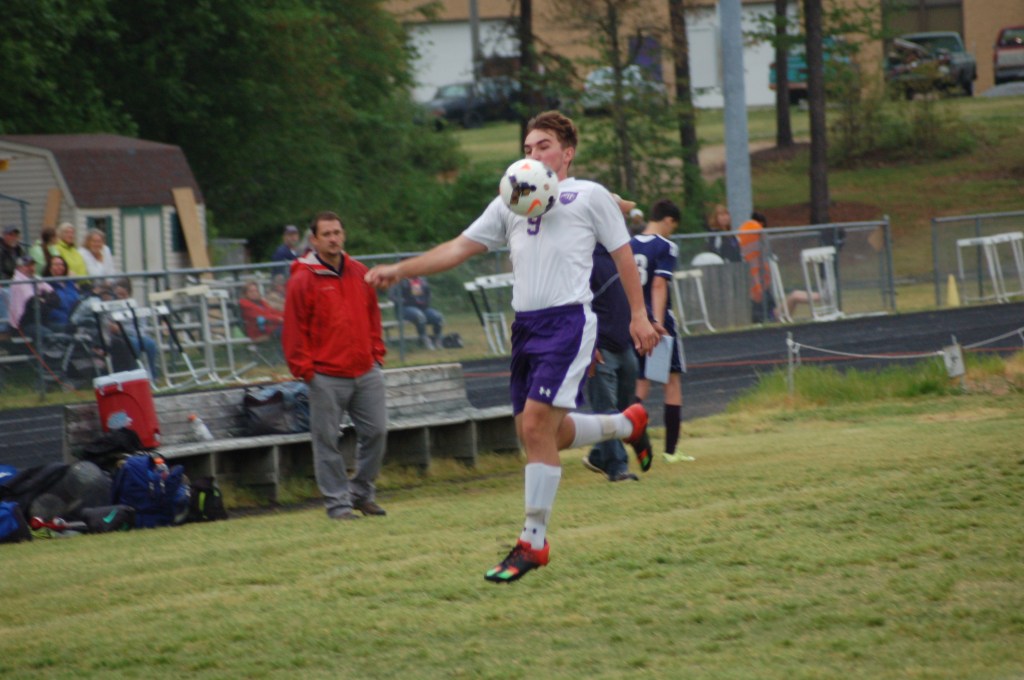 Prince Edward County High School’s Niko Reinson gains control of the ball as he advances during the Eagles’ 6-0 victory over Bluestone. (Photo by Titus Mohler)

The Prince Edward County High School boys’ soccer team worked its way to a 6-0 victory over visiting Bluestone High School on a misty Thursday evening following a contest between the Lady Eagles and Lady Barons that Bluestone won 7-2.

“It just took a little while to get going,” he said of the Eagles’ play on Thursday.

“(The Barons) only had 12 players, and so talking to the coach, he said he was going just sit back and kind of save his guys and not kind of stretch the field, so it was hard for us to break down the 11 players that were defending. Eventually it happened. We had to kind of change up our game plan a little bit, but it worked.”

Prince Edward got its first goal and last goal from Alejandro Taboada, it got two goals from Colton Sheehan and one apiece from Alex Moller and Niko Reinson.

Though his team suffered a loss, Lady Eagles coach Calin Lupas saw growth in his players.

“They are able to keep up the energy and the effort,” he said.

“Their confidence is strong. (In) our first couple of losses, on an emotional basis, we were dropping the level of the play. And, probably, it helps we got five victories (since then), and that kept building their confidence.”

The Lady Barons led 3-0 at halftime, but Prince Edward got in on the scoring in the second half with goals from sophomores Natalie Cheyne and Samantha Buczek. The assists came from Buczek and sophomore Kaitlyn McAbee.

“I think we had a really good game,” Buczek said. “We stepped it up a lot, and we played our game.”

The result was an improvement from the first time the Lady Eagles faced Bluestone this season. They fell 8-0 in the initial meeting, and the game came to a close early due to the slaughter rule.

“But we had a lot of wins recently, so we just put our positive work and what we practiced — we put it all together — made some excellent plays and finished,” Buczek said.