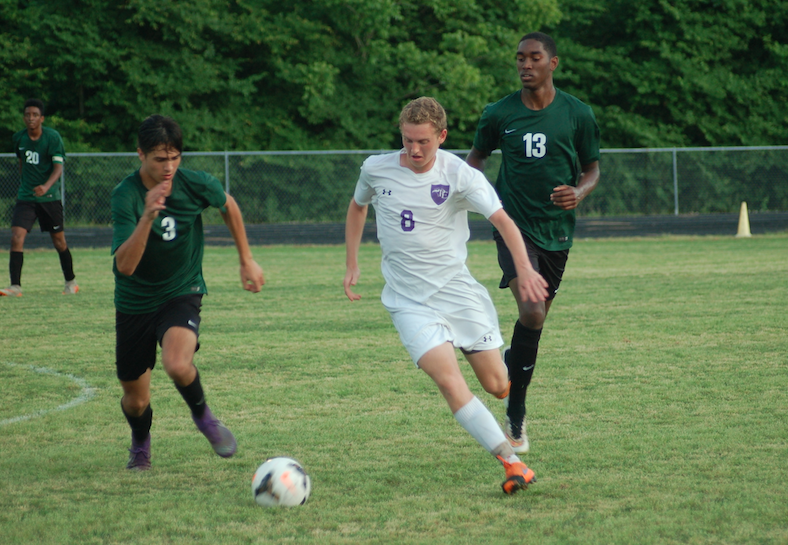 The Prince Edward County High School varsity boys soccer team experienced its first loss of 2016 on Monday night, and the loss brought the Eagles’ season to a close.

“We didn’t play at the top of our game,” Eagles coach Devin Pierce said following Monday’s contest. “This was our first bad game of the season, so if you play bad against a good team, they’re going to put you away, which they did.”

Prince Edwards’ lone goal came with about five minutes remaining in the game when senior Brady Atkins headed the ball into Bruton’s goal off of a cross by senior Niko Reinson.

Eagles players stayed at the field for a while after the game was over to say goodbye to each other and their coaches.

“It’s a big graduating class,” Pierce said. “It’s a huge hit, so it’s more emotional right now because of the seniors rather than the loss.”

Despite losing on Monday, the Eagles were victorious on Friday, defeating visiting Goochland High School 6-2 to claim the conference tournament championship.

“The kids really cherished that,” Pierce said. “It was nice to have coached here for three years and taken home three conference championships.”

Moller registered a hat trick in the game, while Taboada, Sheehan and Reinson scored one goal apiece.

The Eagles finished the season with a record of 18-1.

“They just really became a family,” Pierce said. “It was nice to see players that struggled last year — they really grew — and then they just came together as a family. It was very encouraging most of the year.”