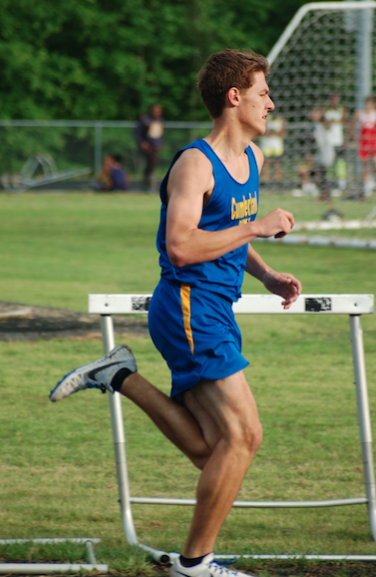 “It was fantastic,” Cumberland track and field coach Kenneth Jasey said of his teams’ performances. “They’re a great group of kids, and they really pulled very well together, and they’re a very young team.”

He highlighted senior T.J. Jackson for winning the discus throw and the shot put. Jackson has signed with Virginia Tech to play football.

For the Lady Dukes, Jasey praised senior Ebony Jones, who captured the district championships in the 400-meter dash and the 200-meter dash. She has signed to run track in college for St. Andrews University in North Carolina.

The coach expressed his hopes that both Jackson and Jones will bring home state titles this year.

“We’ve got a strong miler division,” Jasey said, noting that junior Matthew Bapties won the 1600-meter run, as well as the 3200-meter run. “And he comes from our cross country program, which I’m the coach of the cross country, as well, and he defeated his teammate (junior Jared Halvorsen) who had been out for a while who was the two-time District (Male) Runner of the Year, officially, in cross country, for the past two seasons. So we’re pretty strong.”

The Lady Dukes also produced the winners in the girls 1600 and 3200. Sophomore Ruby Yarborough claimed first in the 1600, and freshman Tayanna Bradley finished first in the 3200.

Prince Edward generated five first-place finishes between its boys and girls teams, the latter of which placed fourth with 62 points.

Lady Knights senior Jamiyah Gough took second in both the 200 dash and the long jump. Freshman Dashawn Bartee accounted for all of the Knights’ points with his second-place finish in the 100 dash.

The Cumberland Dukes track teams will compete in the Conference 42 Track and Field Championships on Wednesday in Charles City at 1:45 p.m.