A voice from a Cloud, Cumberland native competes nationally 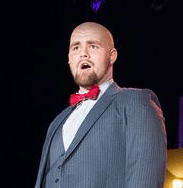 Eighteen-year-old William Cloud, of Cumberland, has taken the lead in local and regional singing competitions.

Because of his success and talent, Cloud has been selected to attend a national voice competition in Chicago.

“There is a rush when you sing, even if it’s not onstage,” he said.

Cloud has been a student under the guidance of voice teacher Silvia Lendon for three years. Lendon, of Midlothian, is a teacher and music director at Characterworks in Richmond and is a member of the National Association of Teachers Singing, NATS.

Teachers involved with NATS bring their students to state competitions once a year. From there winning students are eligible to progress to the regional and national competitions.

This year Lendon took Cloud to the Virginia state competition, at George Mason University, where he placed first in the Upper High School Men Musical Theater category, and then to the regional competition in Charleston, S.C., where he competed against students from Virginia, Maryland, North Carolina and South Carolina.

There, Cloud came in first again.

His success in regionals made him eligible for a YouTube round where 14 students in each category were chosen by a set of three judges to attend the national competition in Chicago.

Yet again, Cloud was chosen to move on and will now compete against 13 other male students for first place in the Musical Theater category at nationals in July. Prizes for first, second and third place will total at least $30,000, according to the NATS website.

“I may have had some raw talent before I started taking voice, but I would be nowhere near the singer I am today without (Lendon’s) teaching,” he said.

When not competing, Cloud is involved with Characterworks Productions. “Most recently, I was a part of a non-musical play, ‘The Miracle Worker,’ Helen Keller’s story, with Characterworks. It was a year-long class that we did that ended in a couple of performances of that play,” said Cloud.

His larger roles have included Judge Thatcher in “Tom Sawyer,” the Russian soloist in “Fiddler on the Roof,” Captain Crewe in “A Little Princess,” and Oliver Warbucks in “Annie.”

“I love singing because it’s my way of expressing myself. I can’t draw very well or paint, and writing usually takes forever,” said Cloud. “With singing (and ultimately acting as well) I can be artistic and tell a story. That’s the ultimate goal of any art: to tell a story.”

“I do know that God has given me a gift, and it thrills me to be able to use it,” said Cloud.

He’s working toward gaining an Associate’s Degree in the next year-and-a-half.

If Cloud wins the national NATS student auditions in July, he plans to use the scholarship money to assist his pursuit of musical theater education.

“(Singing is) one thing that I’ll do for the rest of my life,” Cloud said. “Whether that’s professionally, or just in my shower.”