‘The structure is falling down,’ child psychiatrist resigns from Crossroads Community Services 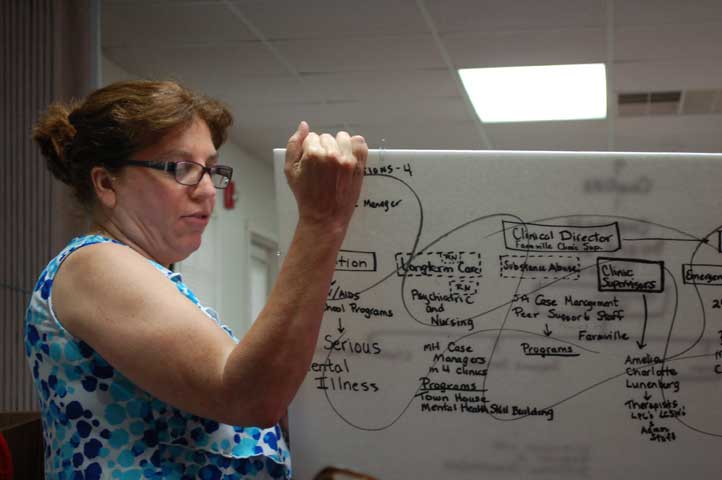 After explaining the agency’s staff structure to the board, Susan Armes, a therapist who’s worked at Crossroads for 15 years, said that she didn’t feel comfortable in her position following the firing of four people in January.

Six people criticized and condemned the Crossroads Community Services Board administration on Tuesday, saying that staff were fearfully silent, “struggling to maintain a positive morale,” acknowledging an atmosphere of “uncertainty and distrust,” and a lack of leadership and abuse of power.

Two Crossroads employees — Valerie Morris and Daphne Weaver — said that the agency’s programs were not failing and that the negative opinions represented a very small portion of those who work at the agency.

“It hurts me personally to constantly hear negativity,” said Morris, who’s been at Crossroads for over 18 years. Weaver said that the staff had the support of the board, speaking for the intellectual disability services division of the agency.

“I’m very limited on what I can say,” said Board Chairman Sid Smyth following the meeting, “because, when you’re dealing with personnel and personnel issues, you have to be very guarded on what you can say.”

“It’s disappointing that because (of) the nature of the industry or the government entity, because it’s personnel issues, you can’t talk about that in public … There is always two sides to every story.”

Dr. Norman Holden, a psychiatrist who has worked for Crossroads for 37 years, said during the board’s public comment portion of the meeting that he had “big concerns about the … lack of leadership” at the agency. He said one of his biggest concerns was that medical decisions were made without consulting medical staff.

“I really do wonder how we’re going to make it with these other people that are lost,” Holden said.

The continued outcry comes months after Executive Director Dr. Susan Baker dismissed four people shortly after she arrived at the organization, calling the action a “reduction in force.”

Weeks ago, the board gave Baker a vote of confidence, renewing her contract that was set to expire in July.

“Individual care began to deteriorate after the ‘work-force reduction’ in January and is continuing to rapidly,” said Brandi Eggleston, an LPN and case manager, who’s been with the agency for over seven years. “Our child psychiatrist, Dr. Heather Henig, has submitted her resignation. A resignation I believe could have been avoided.”

Henig would later speak, stating that she believed the administration’s actions were a “gross violation of professional boundaries,” citing an “abuse of power” and that there was “no structure put in place.”

Eggleston said the plan to refer children to their primary care physicians for medication management was “impractical,” saying that an “atmosphere of uncertainty and distrust amongst staff, our individuals and our community” had been created.

According to the state’s Department of Behavioral Health and Developmental Services (DBHDS), the firings violated a state regulation — failing to notify the DBHDS before implementing changes in the organization’s structure.

The terminations prompted an investigation by the state agency, which began Jan. 21 and ending on Feb. 11, according to an investigation finding report from the department’s office of licensing.

“I have kind of sat on this for a long time, but I am concerned enough that I just need to speak my truth,” said employee Cheri Kindler. “We had solid and consistent leadership. Everybody had boundaries and knew exactly who to go to … Since the removal of our infrastructure, and that is what I call it when the four senior managers were removed, I knew the cookie was going to crumble, because we cannot function without those four positions.”

Kindler said that many staff were silent “out of fear,” and said the organization needed transparency.

“I feel the loss of these four people has created this communication block,” said Susan Armes, a 15-year therapist at Crossroads, stating that she didn’t feel comfortable in her position. “No one knows who to go to,” she said, adding that people were scared.

“Business does move on. Our programs are not folding,” Morris said, noting her support of the agency. She noted new programs that have started at the agency within the last several months. “We are still continuing to provide (services),” she said, adding that the staff was working to “provide good, quality services.”

“I can safely say that those are not the opinions,” Weaver said. “To see that week after week in the paper … It’s very small when we look at the whole agency.”

A recent review of Crossroads by the Virginia Department of Behavioral Health and Developmental Services netted 40 recommendations to the agency. In a letter dated Feb. 18 from Dr. Jack Barber, the department’s interim commissioner, recommendations were listed for board operations, clinical programming, finances, communication, decision-making, clinical oversight and high-risk situations, accessing those with decision-making authority and human resources management.

No action was taken as a result of closed session, which pertained to personnel, real estate and legal issues.

Smyth said he had a very dedicated board. “I am very impressed with the board that I’m serving with right now … They really are dedicated and committed to dealing with the issues we’ve got to deal with.”

This story has been corrected from an earlier posted and printed version.