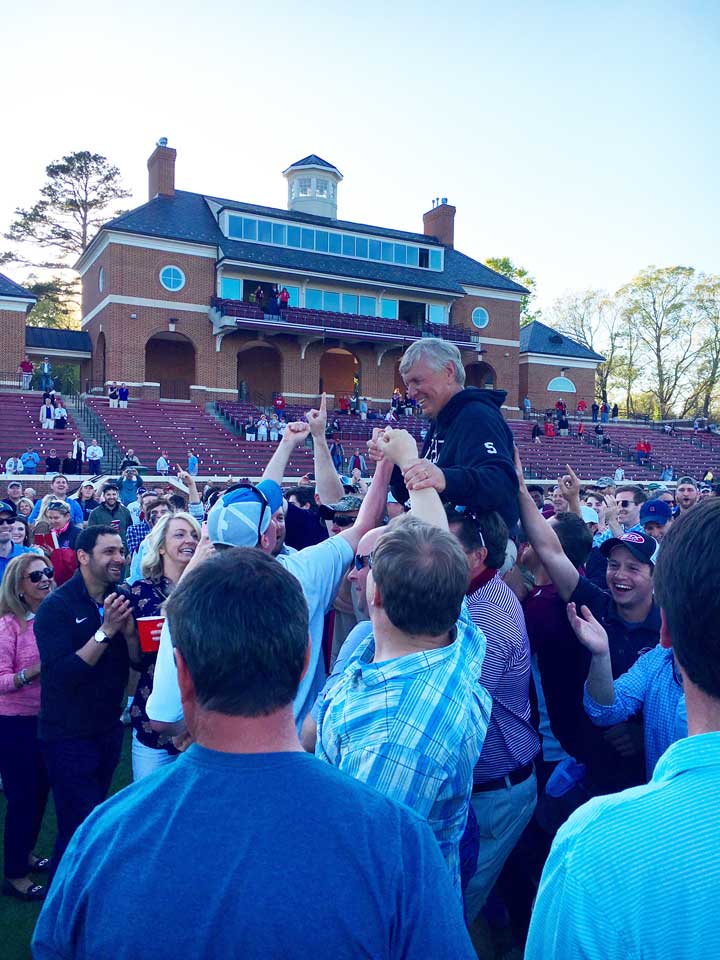 Coach Ray Rostan is lifted into the air after H-SC defeated Lynchburg College 13-9 on April 16. (Photo by Tom Fitzgerald)

The 2016 season has been a special, sentimental time for the lacrosse team at Hampden-Sydney College (H-SC) because head coach Ray Rostan will be retiring after the season comes to a close. Rostan has been the head coach at H-SC for 32 years and only the third in the team’s history.

“Physically and mentally, I believe that I could coach another 10 years, yet this will be a good juncture to step away, to pursue other goals in my life, while enjoying family and grandchildren,” said Rostan.

Ending the 2016 season, Rostan was classified by the NCAA as the 8th all-time coach in all divisions based on wins. For NCAA Division III, he stands 4th all-time by the amount of wins.

As of now, Rostan stands 341-196 as an overall record, with a record of 301-171 at H-SC. He was been the National Coach of the Year in 1989 and 1998. Additionally, Rostan was the Old Dominion Athletic Conference (ODAC) Coach of the Year four different times. He’s led the Tigers to seven NCAA appearances and four ODAC Championships.

Most recently, in December, Rostan was presented the Frenchy Julien Service Award from the United States Intercollegiate Lacrosse Association for a lifetime of successful contribution and commitment to the sport.

Rostan said, “I am so fortunate to have had the opportunity to work with so many fine men at four colleges, yet my relationship with the men of H-SC over three decades has been extremely special as I have also watched them grow in their family lives and careers.”

H-SC’s Athletic Director Richard Epperson described Rostan as being as much of a mentor for building character as he is for coaching. “It’s the things that happen off of the lacrosse field, it’s the academic oversight, it’s the character building, and it’s the intangibles,” Epperson continued, “That tells you it’s much more about lacrosse, it’s about life.”

Currently, Rostan resides in Farmville with his wife, Karen. She has been the purchasing agent for the H-SC bookstore for the past 23 years. The Rostan’s have two children, Jason (Jay) and Jamie.

Jay was a First Team All-American Lacrosse player at H-SC. He’s been the assistant coach at H-SC for the past 13 years and offensive and recruiting coordinator for the past eight years. Jay is married to Amy and they have a daughter, Carter.

The Rostan’s daughter, Jamie, is an oncology nurse at the National Children’s Hospital in Washington D.C. She is married to Luke Davis and they are expecting a baby boy in May.

Rostan said during retirement he plans to spend his time going out on his boat, fishing, reading books, fixing up his house, and visiting his grandchildren. In addition, Rostan may accept a coaching position in Major League Lacrosse if the opportunity presents itself.

“I hoped that my final season would be similar to my first as a head coach in 1979,” Rostan continued, “Our players and coaches banded together as one, with few distractions, a very special relationship that is found in few other endeavors in life.”

This goal of Rostan’s seems to be coming true as the team recently defeated last year’s National finalist team, Lynchburg College, on April 16 and finished their regular season by beating Virginia Wesleyan on April 28. The Tigers took the #3 seed in the ODAC Tournament and will host Randolph-Macon or Guilford on May 3.