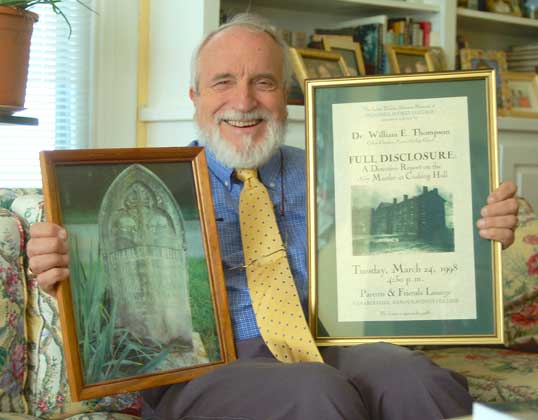 Author William Thompson holds a framed poster that advertised his 1998 talk about the Hampden-Sydney murder and encouraged him to continue his research on the topic. At left, he holds a photograph of Charles T. Edie’s tombstone. The script reads: “Killed in Hampden Sidney College, Va., Jan. 27, 1857, aged 18 yrs., 11 mo. and 3 days.” (Photo by Marge Swayne)

A sketch by Deborah McClintock shows the heart of the Hampden-Sydney campus in the 1850s. Cushing Hall, where the murder took place, is the large four-story building. The fence kept cattle from joining students on the way to class.

It was a dark and stormy night in January of 1857 — the perfect setting for murder. Murder is, in fact, what occurred on the campus of Hampden-Sydney College, a story related in detail in a recently published book, “Murder in Cushing Hall” by William E. Thompson.

“I first heard the broad outlines of the Edie-Langhorne ‘murder story’ from the college historian, the late Professor John Brinkley,” Thompson said.

“Gentlemen, on a cold January day in 1857, in Fourth Passage of this grand old building, Hampden-Sydney College had its first and only murder,” Brinkley would inform incoming freshmen. After a meaningful pause he would add, “Thus far!”

Rev. Thompson heard the speech many times from 1988 to 2002 while he served as pastor of Hampden-Sydney’s College Church.

“I’ve worked on this book for about 25 years,” Thompson said. “Professor Brinkley and I used to lament how people inaccurately retold the facts. For nearly three decades I have been researching the real facts surrounding ‘the murder.’”

The facts read like a Victorian murder mystery. It was the final week of January, 1857, and at Hampden-Sydney’s Cushing Hall 107 college students were suffering from cabin fever from a three-day blizzard that dumped 3 feet of snow on the college.

“The snowfall was finally over by Saturday, but huge drifts, low temperatures and general discomfort made for a boring weekend,” Thompson wrote.

That boredom was slightly alleviated when a student acquired a keg of whiskey — it also led to a fight between two best friends that resulted in murder. The two main characters were Charles Taylor Edie, “a big burly boy” from Christiansburg, and Edward Alexander “Ned” Langhorne, from Oakley Plantation in Amherst County.

“Edie was a country boy, and Langhorne was from a wealthy family,” Thompson said. “Yet they were the best of friends.”

The problem began around the keg of whiskey. Langhorne had signed a temperance pledge during a recent revival at College Church; Edie had not.

“Langhorne came over the night of the drinking (Monday) and got in an argument with Edie, who was inebriated,” Thompson said. “Langhorne had not been drinking. The fight began when Edie cursed at Langhorne.”

There were also rumors that a young lady was involved. Edie reportedly pulled a handkerchief from his pocket and said to Langhorne, “Look what she gave me.”

“Court documents stated that Edie called Langhorne ‘a damn puppy,’” Thompson said. “I thought that wasn’t worth  stabbing, but Billy Watkins (former Farmville mayor and commonwealth attorney) told me that court records changed some of the language — especially if the stenographer was offended by it.” 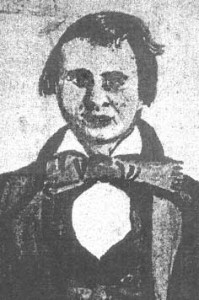 The disagreement between Edie and Langhorne continued the following morning.

“They got to arguing again after Latin class,” Thompson said. “Edie started a fist fight, and Langhorne pulled out a letter opener and stabbed Edie in the heart.”

Several classmates carried Edie up the stairs to the second floor of Cushing Hall where he succumbed.

That would become the basis for one of several ghost tales.

“I was shown Edie’s blood drops on the stairs when I first came to Hampden-Sydney,” Thompson said.

In the 1930s editor of the Hampden-Sydney Magazine Bill Armstrong added his own ghostly slant to the story.

“ Armstrong said that every year on the date of the murder the murder weapon appeared on the fourth floor of Cushing Hall,” Thompson said.

That murder weapon undoubtedly belonged to the accused murderer, Langhorne, who promptly hired a defense team of five lawyers. They argued in Langhorne’s defense that Edie’s murder was a matter of honor, which at the time gentleman had the right to defend.

After two trials, Langhorne was acquitted of murder but was expelled from the college.

“The verdict essentially said, if you’ve been insulted and your girlfriend’s been insulted, you have a right to strike back,” Thompson said.

The preacher at College Church did not agree.

“The Sunday following he preached against the verdict, saying the unwritten code of a Virginia gentleman is not nearly as important as the 6th commandment,” Thompson said. “A sizable number walked out of church.”

After the verdict Langhorne eloped with his first cousin and worked for the family business in Lynchburg. 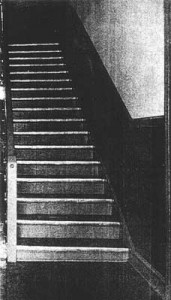 Charles Edie was struck down at the foot of these stairs in Cushing Hall. Classmates carried his dying body up the stairs to the second floor where he succumbed.

Neither the family of Langhorne nor Edie blamed the college for the unfortunate murder on campus. Langhorne enlisted when the Civil War began but soon came down with typhoid fever. He returned to Lynchburg, where he died at Christmastime, 1861. Langhorne’s son later attended a private academy at Worsham — the same building where his father was tried for murder.

The murder also failed to tarnish the reputation of the college, due primarily to an extensive public relations campaign. Enrollment was up in September — more than before the murder.

“While this story of murder is over and done with, it’s good to keep in mind as a teaching tool,” Thompson said. “For thoughtful readers maybe ‘Murder in Cushing Hall’ should be absorbed as a 19th-century moralistic tale with valid lessons for 21st-century college students.”

Despite the passage of time the spirit of Charles Edie and the “murder story” linger at Hampden-Sydney. As Professor Brinkley once told incoming freshmen, “It is Hampden-Sydney’s first and only murder — thus far!”

On a college campus where the humanities and arts have long been valued, the words of philosopher George Santayana are not taken lightly — “Those who do not remember the past are condemned to repeat it.”

“Murder in Cushing Hall” is available at the H-SC Bookstore, Farmville Printing or from the author William Thompson; call (434) 392-7004.

Thompson to speak on H-SC murder