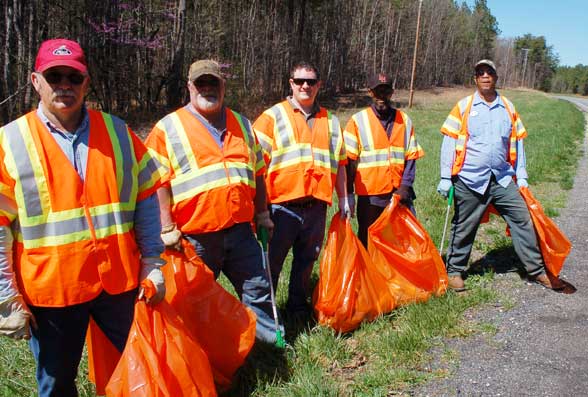 About 65 Kyanite Mining Corp. employees took to the roads across Buckingham County late last month to pick up litter and beautify the county’s roads, filling up about 575 bags with trash.

“We started at (Route) 600,” said crew leader Ricky Amos, a Kyanite employee. “This crew started at 600 and came to right here,” he said, standing a few miles south of Sprouse’s Corner. “See, they’ve got people in Dillwyn, they’ve got people over on Chellowe (Road), Rosney (Road), even on the other side of Dillwyn and U.S. Route 60.”

Eleven teams of 4-5 people took to the roads, breaking only for a company-sponsored lunch at noon.

“We do this because we want to give back to the community in a meaningful way,” said Lakshmi Bertram, human resources manager for Kyanite. “Picking up the trash along the roadsides is environmentally friendly, which is important to us, and also beautifies the roadways. We are fortunate enough to live in a lovely, rural community, so keeping it looking nice seems like the right kind of priority. We were all very touched that the greater community members saw fit to take the time to thank us for our efforts. That meant a lot to the employees here.”

About 25 miles of roadway was part of the cleanup, she said.

“They’re picking up a lot on the main drag in Dillwyn,” Kyanite employee Calvin Wallace said.

“I started at Sprouse’s Corner in the rain last year,” he said.

“I mean, it looks good for a few days at least,” Wallace said. “Sandra (Moss) gave Kyanite props on their (roadside) board today,” he said, referring to the marquee at Moss Motor Co. on U.S. Route 15 in Dillwyn.

“We also provided breakfast, snacks, drinks and a catered barbecue lunch to make it an enjoyable endeavor for our folks,” Bertram said.

“…We always assign employees to teams from different parts of the plants as this allows them to get to know someone they may never see during the course of their work or may only see rarely,” she said.

The crews were sent out to pick up on both primary routes and roads that interconnect around the corporation’s plant and facilities.

“I do not have a verified bag count because VDOT began picking up bags before we had completed the cleanup, but VDOT notified us (recently) that they provided us with 600 bags — of which we had about 25-30 remaining, so an estimate of between 550-575 would likely be accurate,” she said.

Bertram said that Kyanite “absolutely” intends to keep the project an annual one, “with smaller pickups through the year as we see the need.”

Pilots who own planes and fly out of the Farmville Regional Airport and farmers who own land across Cumberland decried... read more