Hope and help rebuild Evergreen, ‘Torn-AID-o’ benefit set for May 7 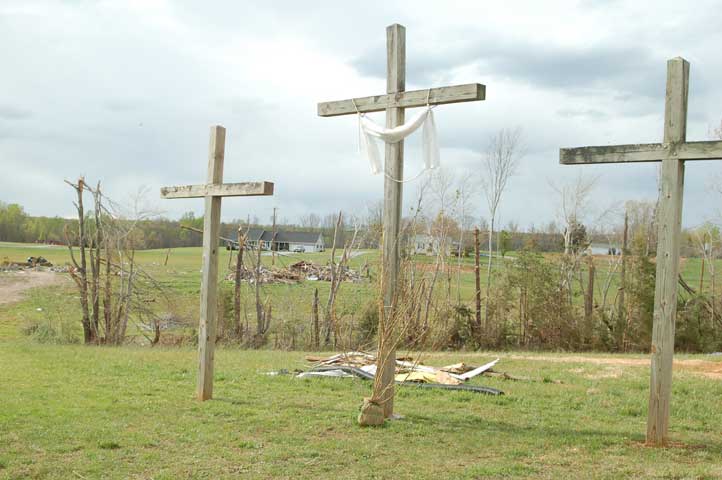 Standing firm on the front lawn of the Evergreen United Methodist Church, three crosses look over a hill to homes that were spared by the tornado and two that were not.

“I didn’t know what to expect,” Bonnie Swanson said of her drive home from Appomattox County High School along Route 460 on February 24.

Tornado warnings had been issued, and as Swanson neared her turnoff at Old Evergreen Road, she knew something was terribly wrong.

Residents of the small Appomattox community already knew what news channels were reporting: an EF-3 tornado with winds between 136 to 165 mph had dropped out of the sky at 3:48 p.m. slashing an 10-mile path of destruction through the Evergreen and Red House communities. State police estimated at least 100 structures were damaged in the storm. 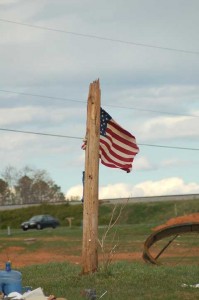 Surrounded by debris, a flag mounted on a broken power pole reflects community pride and determination to carry on.

As Swanson neared Evergreen that night, the view was sobering. Homes along the highway were torn apart — some reduced to piles of rubble — and massive trees were sprawled on the ground, blocking roads and hindering rescue efforts.

As Swanson traveled the mile to her home down Old Evergreen Road, darkness couldn’t hide the fact that a major disaster had occurred.

Swanson was almost afraid to turn down the lane to Evergreen Lavender Farm, the 10-acre property that she and husband Ken have called home since 1999.

“Numerous trees were down,” Swanson said of the damage. “Our house was still there, but all the barns lost their roofs — we lost one whole barn completely.” 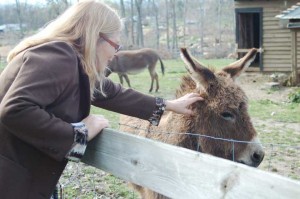 Bonnie Swanson comforts a tornado survivor. “The donkeys ran off but came back,” she said. A pile of debris, once a neighbor’s home, can be seen in the background.

Fortunately, all the animals survived.

“The donkeys were all over the place, but they came back,” she said. “The goat never left — if that barn had blown away the goat would have gone with it.”

The Swansons’ two-story farmhouse was spared, but next-door neighbors were not so fortunate.

“Evergreen Baptist Church, which was untouched, became ‘storm central,’” Swanson said. “You can see it through the trees — before the storm, you couldn’t.”

The Evergreen United Methodist Church, also within view of the Swanson farm, was not so fortunate.

Two months after the storm, three crosses in front of the Methodist Church stand silent testimony to the faith of this close-knit community.

Faith as well as help was needed in Evergreen the night of the tornado, and it arrived the next day — more than a hundredfold.

“The whole Methodist parking lot was full of maybe 50 trucks the day after the tornado,” Swanson said. “There were trucks with buckets, dump trucks — all kinds of trucks. There was a church group, the Southern Disaster Team, that came around that day with chain saws and ‘tarped’ roofs. A team from came and worked all day. It was a huge help.”

“There’s a lot that’s gone,” Swanson said. “But there’s a lot of debris still. It will be a long time before everything is put back.”

Framing for a new barn is already in place behind the Swanson home, and plans are underway for an upcoming lavender workshop and two June weddings.

“My biggest pleasure is in having people come here to walk through the lavender,” Swanson said.

Swanson sees events such as the Lavender Festival as a much-needed break from stress — especially this year. Having experienced the tornado first-hand, Swanson understands the need to step away from stressful situations — even for one afternoon.

With that thought in mind, she agreed to host, “torn-AID-o,” a fundraising event for tornado victims set for May 7.

At the same time Ken Swanson was planning a similar music fundraiser with the Appomattox Folk Orchestra, a group he organized with 17 local musicians.

“What we did was combine it all,” Swanson said.

The “torn-AID-o” fundraiser, a joint effort of Appomattox Courthouse Presbyterian Church, the Evergreen Ruritan Club, The Drugstore Grill and Evergreen Lavender Farm, will be held May 7 from noon-5 p.m. For a $10 ticket guests will enjoy food prepared by T & E Catering and The Drugstore Grill and music by the Appomattox Folk Orchestra, Shaky Grass and Dixie Road Bluegrass Band (subject to change).

“All the money from this event will go to the fund for tornado victims,” Swanson said.

While Swanson watches the sky more these days, she doesn’t plan to live in fear.

“I can’t control the weather,” she said. “But what I can do is grow lavender and make this a beautiful place.”

Swanson’s lavender has yet to bloom this season, but like the community of Evergreen — it will.