High school students from Rockingham County presented a student-led journey into civil rights history in collaboration with the Moton Museum and Fuqua School throughout Farmville on April 21.

Justin Reid, director of education and public programs at the Moton, said, “The Moton Museum strives to empower young people and the Rockingham students are a great example of that.  These students exceeded what’s required by standardized tests. They became educators and, in the process, mastered skills that will help make them successful in the future communication, collaboration, creativity and critical thinking.  We hope to have local students engage in this same kind of project- and place-based learning.”

According to Beau Dickenson, Rockingham County Public School’s coordinator of history and social science education, Barbara Johns’ history and influential work as a teenager inspired the school division to inspire local teenagers to make a mark on history. 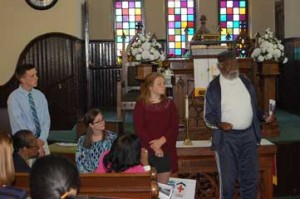 Barbara Johns led the 1951 student strike out of the Robert Russa Moton High School in Farmville. The Davis vs. Prince Edward case was filed following this strike in an effort to create equal opportunity for all races in the education system and desegregate schools. The case was included in the Brown vs. Board of Education case, which ruled segregation in education unconstitutional. 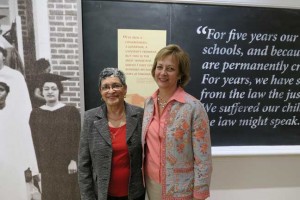 Patsy Franklin, left, and Rockingham County Superintendent Dr. Carol Fenn, pose in the Moton Museum next to the historic photograph of Franklin at the 1965 Free Schools graduation ceremony.

Former Moton High School students and members of the community were in attendance throughout the event.

“In addition to learning about the importance of these historic events, we hope that our students recognize that their generation will be responsible for the next chapter of this powerful narrative,” Dickenson said.

“Fuqua School eagerly collaborated with Rockingham County on this unique project,” John Melton, head of school at Fuqua, said.  “This was an invaluable opportunity for our students to work with peers from across the commonwealth in researching a vital chapter of our shared history. The past certainly came alive as we walked through Farmville with a number of honored guests.”