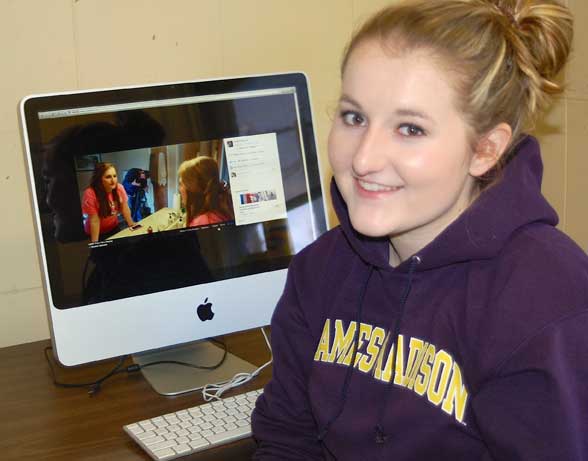 Kolby Grimsley, pictured on the screen beside her as Mandy in “Hurt,” hopes the film will offer solutions in preventing teen depression, suicide and violence. The film will premiere at the Byrd Theatre in Richmond April 24. (Photo by Marge Swayne)

From ‘Hurt’ to hope — film aims to heal

Kolby Grimsley is a teenager on a mission. Distressed by two suicides and the threat of a school shooting, the 17-year-old from Prospect decided to take action. The result was “Hurt,” a movie aimed at preventing teen depression and violence.

“I’m a senior at Appomattox County High School,” Grimsley said. “At the end of my junior year, a boy threatened to come and shoot up the school, and the school ended up having to close the next day. The next morning they found that boy dead in his room — he had killed himself. At the beginning of this year, a boy in the eleventh grade also committed suicide.”

Following the second incident, Grimsley decided something needed to be done.

“All of this was happening, and nobody was doing anything about it,” she said. “I’ve always been really into acting, so me and a group of my friends started a little film company called ‘All for Him.’”

The high school senior got in touch with Ben Brown, whom she had worked with in a previous film.

“He loved the idea and put us in touch with a scriptwriter he knew in Richmond,” Grimsley said. “One thing led to another, and we just finished filming in March.”

The feature-length film, “Hurt,” will premiere at the Byrd Theatre in Richmond on Sunday, April 24, at 1:30 p.m.

Comparable to the 1985 classic “The Breakfast Club,” Grimsley’s film offers an inside perspective on issues that lead to teen violence and suicide.

“It’s a story that follows five different teenagers,” Grimsley said. “They’re very different people going through very different struggles. It eventually leads up to a school shooting. The film tries to show the underlying reasons kids feel like they need to do this kind of thing.”

Actors for the film were recruited from Richmond, Appomattox and Washington, D.C.

“Ben (Brown) devoted so much of his time and money,” Grimsley said. “He got all of our equipment and crew. Everybody volunteered their time — nobody was paid.”

The movie was filmed in Lynchburg, Richmond, Appomattox and Farmville.

Grimsley’s role in the film is Mandy, a cheerleader.

“She’s all alone — at school she’s just the pretty face,” Grimsley said. “But she has this teacher who has nefarious intentions toward her. Her life is spinning around.”

Another character in the film is Eli.

“Eli’s parents didn’t want him, so he lives with his grandmother,” Grimsley said. “But his grandma is dying of cancer. Then there’s the bully Jason. He’s from an abusive household — you have all of these different characters.”

Grimsley hopes that her movie will lead to much-needed conversations on the topics of depression and violence.

“We want to get the film in curriculums in the schools around here,” she said. “We will travel to schools within a reasonable distance to give our testimony on what we’re trying to accomplish.”

The film’s goal, Grimsley believes, will be clear to anyone who sees “Hurt.”

“We’re trying to show that you don’t have to turn to things like self harm or harming others,” Grimsley said. “It won’t help the situation. We want to prevent further things like that from happening.”

All proceeds from “Hurt” will be given to the American Foundation for Suicide Prevention.

“My peers all think the film is going to be really effective,” Grimsley said. “They’re very supportive.”

Grimsley believes that spreading the message of “Hurt” will lead to another four-letter word — “hope.”

“If we can save one person’s life, we’ve accomplished what we want to do,” she said. “We want people to take away hope.”

Three people who police say destroyed a dozen mailboxes, damaged a gravemarker and stole church property have been sentenced with... read more