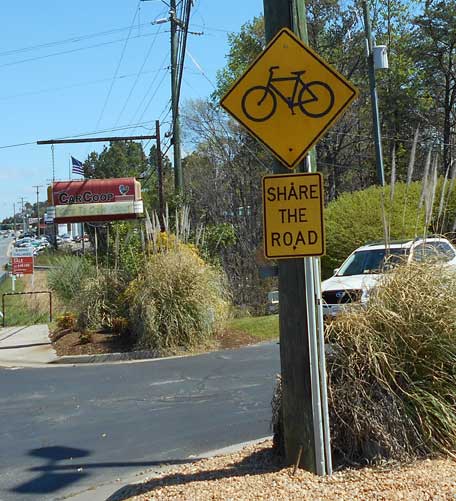 This lone sign on a utility pole in front of the Car Coop, located at 2004 S. Main St., heading north, is the only sign warning motorists to watch out for bicycles.

Special to the Farmville Herald

Longwood University is moving closer to becoming a pedestrian campus, and students are again asking about designated bike lanes, specifically along Main Street from the entrance to High Bridge Trail State Park south to the university-managed Longwood Village apartment complex.

The university implemented a new master plan in September 2014 with a planning consultant team led by Cooper Robertson of New York City.

The primary purpose of this plan is to guide the development of Longwood’s campus to support approximately 6,000 students by the year 2025, a goal the university has been working toward for a while.

The master plan contains provisions for proposed South Main Street improvements that include construction of bicycle lanes and sidewalk improvements.

“We are committed to being a bicycle-friendly campus and we are working towards the bike lanes becoming a reality,” said Justin Pope, chief of staff to Longwood President W. Taylor Reveley IV. “Additionally, we are looking forward to working with Farmville in all phases of our master plan and the South Main Street improvements including the bike lanes are improvements that students talk about often.”

Elizabeth Seaborn, an administrative assistant with Longwood’s Public Relations Department, said, “Another thing about the bike lanes that makes it so attractive to students is, when you think about it, so many retail shops, restaurants, and the bowling alley are south of campus. And when you can hop on your bike by yourself or with a group of friends, well, no parking hassles, no gas, and it’s very convenient.”

Currently, there are no designated bike lanes along Main Street north to Longwood and bicyclists must travel in the same lane as vehicles and must exercise extreme caution while making the round trip and the situation worsens for bike riders during the traditional rush hour travel times.

Longwood student Emily Barksdale, a Longwood village resident, said she would love to see bike lanes on South Main Street from campus to the Village.

Town Manager Gerry Spates said he is in complete agreement with Longwood on the issue of having designated bike lanes along Main Street and streets where a significant increase in bicycle traffic is a real possibility.

“With ongoing concerns over parking and enrollment increases, Longwood is moving closer to becoming a pedestrian campus with bicycle transportation being the primary choice,” said Spates. He also said both Farmville and Longwood police departments would work together in developing bicycle safety programs and ensure automobile and truck drivers do their part in sharing the road with bicyclists.