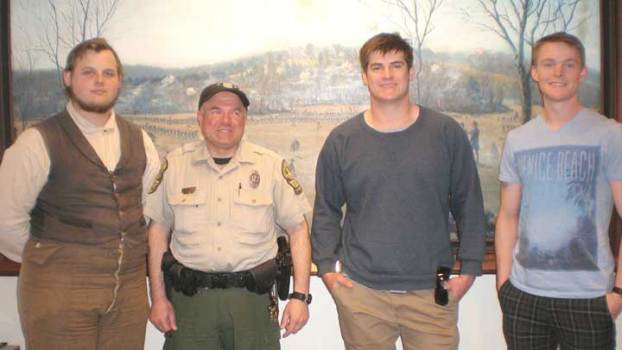 Two Royal Australian Air Force fighter pilots visited Crewe over the Easter weekend while on a brief break from training in the Virginia Beach area.

Flying Officer Nick Power, of Melbourne, and Flying Officer Jake Westcott, of Peak Hill, were guests of Molly Williams and Amelia Eanes, hosted by their respective parents Mark and Gigi Williams and Greg and Rose Eanes. Both young men are graduates of the Australian Defense Force Academy, a joint service equivalent to West Point.

The two men are F/A-18 Super Hornet pilots training with the U.S. Navy until sometime in the autumn when they will return home for several more months of additional training. They will be assigned to operational squadrons and will likely see a deployment in support of the global war on terror.

Under Operation OKRA, an estimated 600 Australian Defense Force personnel are engaged in combat operations with the U.S.-led coalition against the Islamic State of Iraq and Syria (ISIS). About 400 are with the Australian Air Task Group while another 200 support Special Forces and other related operations.

Both men enjoyed the opportunity to get out of the urban Tidewater area and into the Virginia countryside where they were able get in a hike at High Bridge Trail State Park and visited Sailor’s Creek Battlefield Historical State Park. They hope to return to the area in the near future.