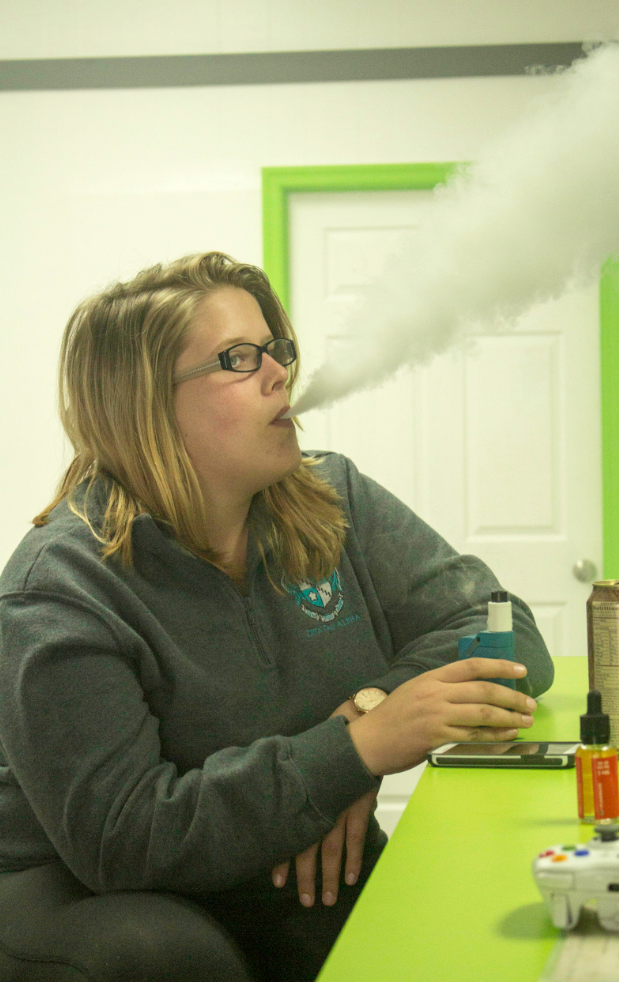 Courtney Augerr, a vaporizor user, chose vaping as her alternative to smoking cigarettes. She has since quit smoking.

The unknown of a new sensation

Upon walking into Vaperdemic on High Street in downtown Farmville, one’s vision is immediately clouded — literally. As one enters the vaporizer supply shop, one steps into a room filled with white haze and a lingering smell of sweets like a bakery. However, unlike entering a cigar or tobacco store, the haze doesn’t make one cough, the smell does not stick to one’s clothing and studies show that it isn’t nearly as bad for one’s health.

Nicotine is the addictive element in cigarettes; however, cigarettes also contain many other, dangerous ingredients.

According to the American Lung Association’s website: acetone, like nail polish remover, formaldehyde, used in embalming, tar, as in to pave roads, and ammonia, like house cleaners, can all be found in the common cigarette. These chemicals are then released into the air, and into the user’s lungs, as one lights up.

Vapes and other electronic cigarettes are regulated by the Consumer Advocates for Smoke-free Alternatives Association (CASAA). “We don’t know the future,” said Gage.

According to CASAA, studies show that the components do not cause diseases or cancer related to the ingredients found in vapes. According to the Food and Drug Administration (FDA) as of July, “The FDA Center for Tobacco Products regulates cigarettes, cigarette tobacco, roll-your-own tobacco and smokeless tobacco.” Within that description, the FDA does not currently regulate e-cigarettes.

“There’s a degree of battery knowledge that (is required) for safety,” said Gage. The battery assists with creating the components that create the charge and heat the liquid to then create the water vapor.

In order to purchase a vape, Gage said simply, “You gotta be 18.”

A CASAA-certified study by Etter and Bullen found that over 90 percent of users were current or former smokers. Of that 90 percent, 70 percent of those users no longer smoke tobacco-based products.

Courtney Augerr, a Longwood University student and regular customer in Vaperdemic, began vaping as a way to stop smoking cigarettes. “I’m pretty much off of (cigarettes) now,” Augerr said.

Augerr said that using a vape makes her feel “less tired” and overall healthier as opposed to when she used cigarettes. “Before, you just felt so gross after smoking cigarettes, this just makes you feel so much better.”

With electronic cigarettes still a relatively new addition to the oral fixation list, many organizations and building management advisers still treat the product like any smoking device.