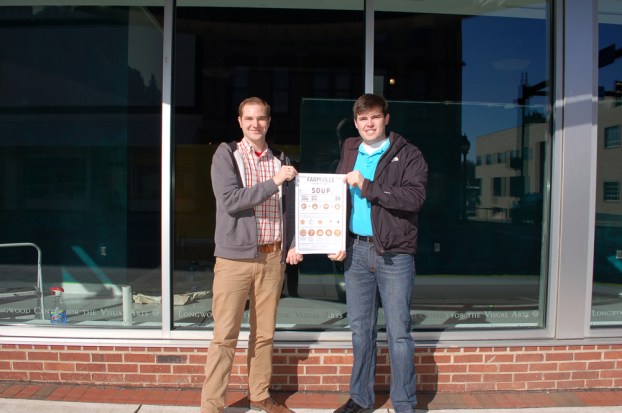 SOUP event to be held Friday at the LCVA

The community is invited to the inaugural Farmville Downtown Partnership’s SOUP event, set for Friday at 6 p.m. in downtown Farmville.

The event will be held at the Longwood Center for the Visual Arts, located at the corner of Main and Third streets.

According to a press release from the partnership, proposed projects could include art, urban agriculture, social entrepreneurship, education, technology and more.

During the event, the community will have a chance to ask questions about the proposals, eat soup and vote on the winning proposal. Guests are asked to provide a $5 donation as entry to the event. Tickets will be sold at the event.

A minimum of four finalists will be asked to present their proposals. “The winning idea will be implemented under the auspices of the Farmville Downtown Partnership in conjunction with its proposer,” according to a partnership press release.

“Improving a community begins with an idea. But it takes initiative to develop that idea and financial support for it to become a reality,” said Joe Gills, a Farmville Downtown Partnership volunteer and the SOUP event coordinator. “Farmville Downtown exists to help the community by offering a grassroots model for crowdfunding creative projects — while enjoying a tasty meal.”

Originating in Detroit, SOUP events are now held all over the country as a way to fund creative projects. The event generates discussion about community grant projects and helps develop partnerships between applicants and the region.

“We think that it’s going to help expand the scope of the event. The whole point is to increase community involvement and improve the community.”

Now that the grant has increased, Burton says that FDP hopes to choose multiple winners to share the grant and enact their proposals.

In addition to Longwood’s monetary donation, the Longwood Center for the Visual Arts has also donated its time to help prepare the location for the SOUP event. Aramark has agreed to donate its catering services for the event.

By Carson Reeher Special to The Farmville Herald On March 23, Longwood University and classrooms across America recognized the anniversary... read more