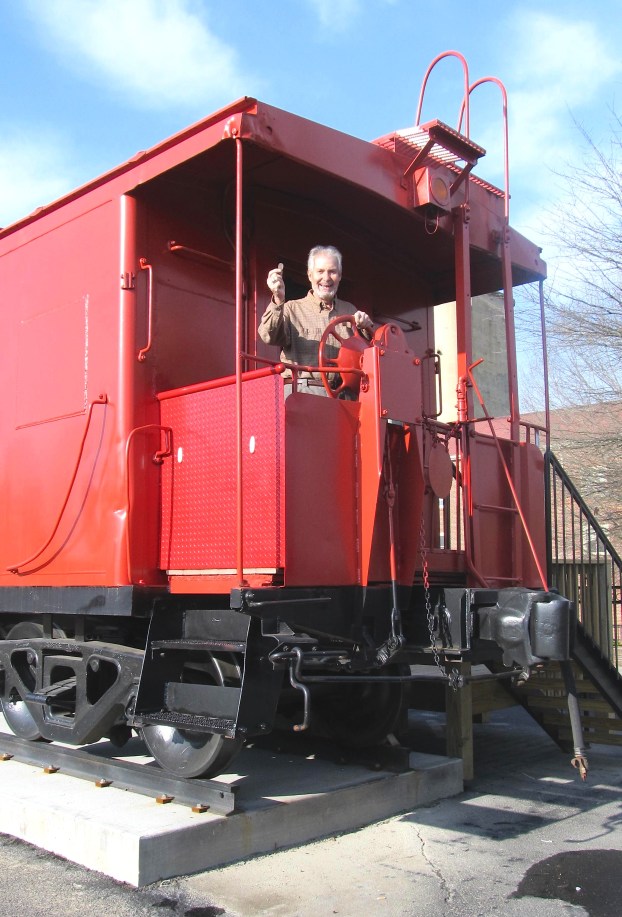 Standing on the last caboose to click and clack on rails on Main Street, Dr. Jim Jordan holds a penny that he and his daughters put on the rails on July 15, 2005, when the last train came through Farmville.

Sights, sounds and smells of Farmville’s past

On Easter weekend 151 years ago, the Civil War was ending in Farmville. The battles at Saylers Creek and High Bridge had been fought, and Yankee and Confederate armies had marched through Farmville on the way to Appomattox. History books tell us what happened during those fateful days, but some things history does not record. What sounds and smells would we have found in the Farmville of 150 years ago?

The prevalent smell on Farmville’s Main Street in 1866 was smoke. Most homes were heated with coal, and mixed with humidity from the Appomattox River and Buffalo Creek, smoke created a fog that blackened laundry drying outside. Adding to this was the eye-watering charcoal smoke from four blacksmith forges. 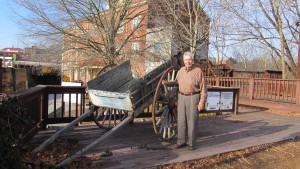 Dr. Jim Jordan examines a one-horse cart that 150 years ago would have rumbled over the streets of Farmville bringing grain to Prince Edward Mills in the background.

Household garbage and trash added a secondary smell. Most waste was thrown out a window or door to land and rot a short distance from the house. When we archaeologists are excavating a colonial homestead, it’s possible to see where doors and windows were located by the fan-shaped patterns of discarded bones, broken pottery, and ash from a hearth.

Much of this waste was animal-related since people butchered meat at home. In rainy periods, this offal was trampled into the mud and mire to make a rich and stinky muck.

Speaking of animal waste, consider that nearly all transport was by horse, mule or oxen. The solid and liquid wastes of these large animals covered the streets. In the 1860s in a town the size of Farmville, horses alone would have deposited 9,000 pounds of waste every day. Most of this went nowhere until rain washed it into ditches — where it smelled awful — or it was carted into gardens where it also smelled awful!  Some homes on main streets had elevated steps so people could get in or out of wagons and carts without stepping in this mire. It was for this reason that well-bred gentleman walked on the street side of a lady to catch the slop before it splattered her dress — but the smell remained.

There was a place downhill from all this muck where all of it eventually found its way — the Appomattox River. The neatly concreted channel of today’s Gross Branch, behind Longwood’s Landings beside Fourth Street Motors (where 150 years ago a livery housed horses — a wonderful continuation of a tradition) continuing on to Macado’s, was a boggy, smelly marshland. The Appomattox was polluted and undrinkable — and smelly.

The garden privy also dispersed its own pungent aroma. Today archaeologists delight in excavating these deep cess pits — in addition to the often accidently dropped chamber pot that slipped out of someone’s hands while being emptied of “night-soil,” there are rings, keys, books, buttons and watches.

Now that we’ve sampled smells, what sounds would our ears record? Certainly some sounds would be the same, but there are chickens and guineas clucking, oxen lowing, pigs grunting, goats and sheep bleating, mules braying, horses neighing, ducks quacking and turkeys gobbling.

Then there were street sounds. Most stores had signs that swung on rusty hinges. Add to that the constant jingling of harness bells on horses, mules and oxen — and the din increases.

Horse-drawn wagons and carts rolled on huge wheels, some as tall as a person with 8-inch-wide rims, often shod with iron straps to bear heavy loads.  Can you imagine the clattering of animal hooves and iron wheels rolling over rough cobblestones day and night? Reproducing these conditions today, experiments have recorded up to 90 decibels (100 decibels being the threshold for ear pain).

Many businesses in town had their own associated sounds.  Factories, like “prize barns” that processed hogsheads of tobacco, used shrill whistles (130 decibels) to organize the workday. Prince Edward Mills, built in 1838, had water running over its crib dam (the remains may still be seen from the rear deck of the renovated Mill at One Water St.) to turn its huge mill wheel and grain grinding stones. The screech and chatter of these heavy devices was heard by young ladies of  the Normal School on High Street.

Much of the production of Farmville left town on batteaux. Bowmen on these flat-bottomed boats signaled their arrival with loud horn blasts and small cannon fire. You can get an idea of these sounds at the Batteau Festival held in June — those cannons make trees on the riverbank shake!

This brings us to that most romantic and haunting sound of our past that I personally miss so very much — the click-clack of train cars over the rails and the engine’s whistle as mighty trains rolled through town day and night.  How sad it is to recall that sound but hear it no more in the middle of the night.

As an archaeologist, I have the chance to touch and hold objects from olden days in my hand, but how much would I give to be able — just for one afternoon — to smell and hear a day in the lives of our ancestors of 150 years ago!

DR. JIM JORDAN is professor of anthropology at Longwood University. He can be reached at (434) 395-2244 or www.jordanjw@longwood.edu.

Cumberland 4-H is now accepting registrations for the 2016 Junior 4-H Camp, an overnight camp for youth ages 9-13, to... read more