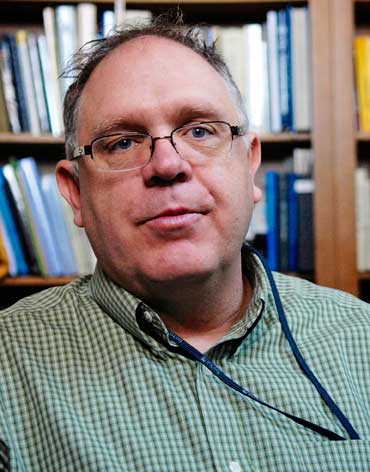 Prominent biologist to speak at Longwood

Since the time of Charles Darwin, the rate of evolution has been assumed to be very slow. Recent research, however, has shown that evolution can occur quickly, often within just a few decades.

A biologist whose research has contributed to this field, called “contemporary evolution,” will present Longwood University’s Simkins Lecture on Monday at 7 p.m. in Longwood’s Blackwell Ballroom.

Dr. Craig Stockwell of North Dakota State University, will speak on “Human Driven Contemporary Evolution in Wild Populations.” The talk, which will focus on Stockwell’s research on endangered fish in the southwestern United States, is free and open to the public.

Stockwell has found that contemporary evolution often occurs in response to human-associated phenomena such as climate change, invasive species and habitat degradation.

“The same factors that are driving the current extinction crisis also drive contemporary evolution,” said Stockwell, whose work on the evolutionary ecology of the White Sands pupfish in New Mexico began in 1995. “For instance, many populations have been shown to evolve in response to invasive predators. Further, invasive species have been also been shown to evolve as they invade new habitats.

The lecture, which will be followed by a reception, is part of a series established in 1979 to honor Dr. Francis Butler Simkins, a historian who was one of Longwood’s most revered and respected faculty members. The series brings one eminent scholar or professional to campus annually.

The Rotary Club of Farmville assisted students at Longwood University’s College of Business and Economics in career preparation by providing... read more