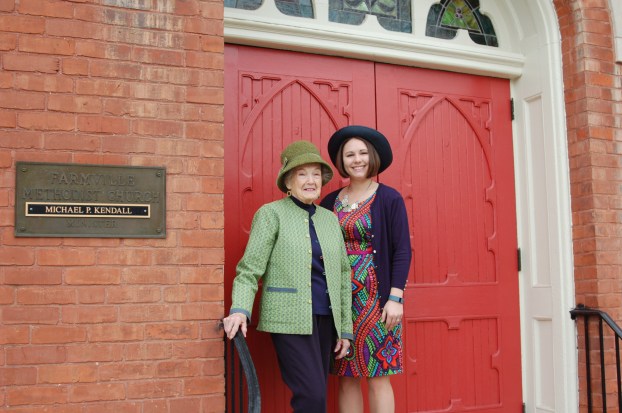 Jane Crute, age 90, has watched countless fashions come and go over the years. Crute, who wears the nickname “hat lady” well, has launched a one-woman campaign to revive a style practiced religiously by Farmville women in days gone by — wearing hats to church.

“Women wore hats,” Crute said of earlier days in Farmville. “We all wore hats — and we always wore them to church. When I married Dave in 1952, we were wearing hats.”

Jane’s husband, the late David Crute, owned and operated Crute’s Office Supply at the corner of Main and High streets for 39 years and was also Farmville’s mayor from 1972 to 1998. 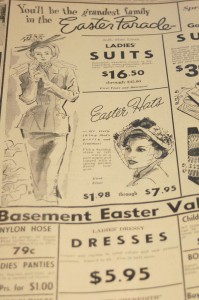 Hats were important accessories for fashion-conscious women in the 1940s. This advertisement appeared in a 1949 issue of The Farmville Herald.

“I hadn’t meant to do it because I had four children, but I went to work in the store, too,” Jane said.

Mrs. Crute, who studied business at Longwood, took her job at Crute’s seriously. When the store decided to carry art supplies, she signed up for art classes.

“I decided I better learn about the art supplies if I was selling them,” she said.

Crute, the third of five children, grew up in Cumberland. Her father had a garage and sold cars.

“Daddy could fix just about anything,” she said. “One time he fixed an airplane and then went up in it to make sure it worked!”

All the women in the family, she added, wore hats to church.

“I had an aunt who never left the house without her hat,” Crute said. “She wore Sara Sue hats — they were one-of-a-kind. I still have several of them.”

Sara Sue was a designer for Miller & Rhoads Department Store. In bygone years when women wore hats and gloves, fashionable ladies sought out Sara Sue’s custom designs. Shoppers from all over the South would head downtown to browse Miller & Rhoads and catch up on the latest gossip in the Miller & Rhoads Tea Room.

“It used to be an event to go shopping in Richmond and have lunch in the Tea Room,” Crute said.

Crute remembers when hats — and sometimes gloves — were acceptable attire for the Woman’s Club meeting in Farmville.

“We wore them to the garden club, too,” she said.

“I guess I stopped wearing hats when the hairdos changed,” she said.

Crute followed the prevailing styles until she witnessed an event five years ago.

“It was the royal wedding of William and Kate that inspired me again,” Crute said. “The women looked so pretty coming into church in their hats.”

Crute decided to take hat in hand, then put it on her head.

“I had all these hats,” she said. “I decided might as well start wearing them. I thought, by golly, if I start wearing a hat every Sunday surely somebody else will pick it up.”

So far there have been no takers — until last Sunday, that is. Crute’s granddaughter, Ashley Crute, who recently took a position as associate director for the Longwood University Career Center, decided to try adding a hat to her ensemble for church.

“I loved trying on her hats and choosing just the right one,” Ashley said. “All of my grandmother’s hats have such stories and have really become what my generation calls her ‘statement piece.’”

Will the younger Crute take up hat wearing on a regular basis?

“I don’t want to steal my grandmother’s signature style,” she said. “But maybe I’ll start to make hat wearing a more regular thing!”

“Jane Crute is always a delight,” Kendall said.  “Her radiant smile and glowing cheerfulness can make any day brighter. Some say the right hat make an outfit. I look forward to seeing Jane each Sunday; she always takes the time to bring both style and grace.”

Crute admits that it takes a bit of planning to choose just the right hat for Sunday morning.

“I start on Saturday night,” she said. “I check the weather to see if what I’m planning to wear is warm enough. The 8:30 service doesn’t give me much time to get ready in the morning!”

Over the past few years Crute’s hats have garnered comments and compliments from the congregation at Farmville UMC.

“At one time so many people were talking about the hats I was afraid they thought I was showing off,” Crute said. “It’s because I don’t want to look like everybody else — and I do believe you should dress for church.”

Crute was encouraged when she learned that a hat-making class is being offered at Red Door 104 in Farmville next month.

Her reputation as the “hat lady” aside, Crute still believes in the old saying, “clothes make the man (or woman as the case may be).”

“How you dress does make a difference,” Crute said.

With or without hats, Jane Crute is living proof that it’s true.

Good Friday ‘Down the Via Dolorosa’

On Good Friday we remember Jesus going to the hill of Golgotha carrying his cross on bloody shoulders. The image... read more