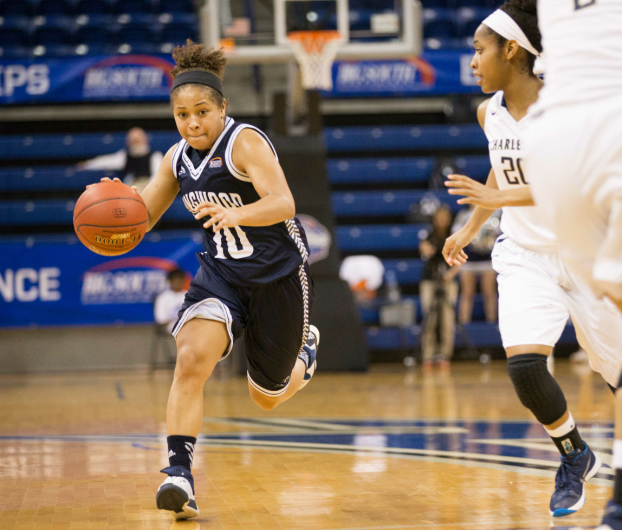 After outscoring the Longwood University women’s basketball team by 20 points in the first half, the Charleston Southern Buccaneers rode their comfortable lead to a 75-50 victory Thursday in Asheville, N.C.

Redshirt-junior guard Alyssa Mann paved the way for the Buccaneers as she exploded in the second half, ending with 23 points.

“Alyssa Mann’s their best player … It’s funny, it’s on the scouting report she drives hard right, she shoots pull-up threes and we didn’t defend any of it today, so sometimes even the best laid plans don’t get it done,” said Longwood women’s basketball head coach Bill Reinson.

Hitting 24.1 percent of their shots before halftime, not enough of Longwood’s shots fell to allow them to crawl out of a deep hole. Longwood improved to 34.4 percent in the second as the Buccaneers dropped from 52.9 percent to 26.5 percent as Charleston Southern head coach Fred Applin said he decided to play more of his bench, who accounted for 26 points.

Prior to the game, Longwood was on a two-game winning streak for the second time this season after defeating its final Big South opponents, No. 4 Gardner-Webb and No. 9 Coastal Carolina.

“I think we came out flat, which was disappointing after coming off two back-to-back wins where we played very well,” said Reinson. “Don’t really know what the answer is for it.”

“You guys don’t get to see Micaela Ellis enough; she’s a great kid, heart and soul of our team,” said Reinson. “She plays hard from beginning to end … and she battles every game.”

Ellis will have two more years as a Lancer, but as another season comes to an end, Longwood will graduate three seniors — guards Raven Williams, Kyndal Skersick and Headen, and redshirt-junior Khalilah Ali.

Williams was unable to play due to injury, while Skersick found herself well-defended as she entered the game as Longwood’s leading scorer, averaging 9.1 points per game. Ali returned from injury late in the season to play her final eight games, adding six rebounds.

“We were kind of off, our focus wasn’t there, and I’ll take full responsibility for that, but it’s unfortunate,” said Reinson. “It’s unfortunate because we’re a much better team than what we showed today.”

The Lancers end their season 8-22.

By Halle Parker The Farmville Herald After outscoring the Longwood University women’s basketball team by 20 points in the first... read more