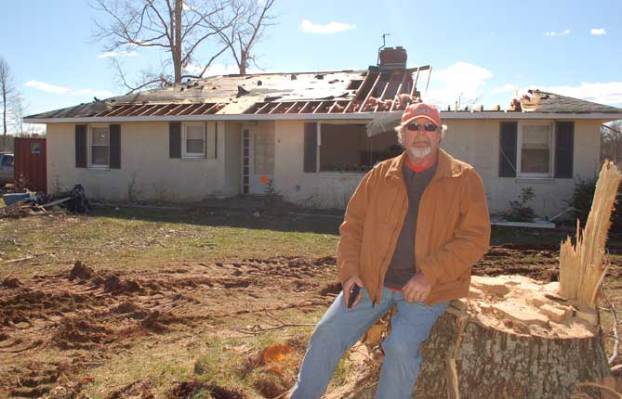 Jimmy Womack sits on what’s left of a large tree that stood in front of his home, which was badly damaged during a tornado that struck Evergreen last Wednesday afternoon.

‘Everybody pulls together’ — Clean up continues in Evergreen

By Marge Swayne and Jordan Miles

Amid the destruction of an F-3 tornado that ripped through Evergreen last Wednesday, there’s an overwhelming sign of hope and support.

“Red Cross workers continue to work around the clock to support those impacted by the tornadoes,” CEO of the American Red Cross Virginia Region Reggie Gordon said.

Other local efforts include a GoFundMe Facebook page, ReBuild Appomattox, and another Facebook page, #AppomattoxStrong Tornado Relief/Assistance that serves as a clearinghouse to connect specific needs with offered resources. One posted need was met over the weekend — fencing and shelter for two donkeys owned by an Evergreen resident who lost everything else in the storm. 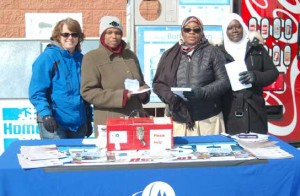 A group from Gleaning for the World collected donations and supplies for local tornado victims at the Appomattox Walmart store Saturday. Pictured, from left, are Andrea Craig, from WSET Lynchburg News, which provided a truck, Traci Upshur, Barbara Person and Cynthia Woodall. “We are all in the family of God,” Upshur said. “When one of God’s children is hurting, we all hurt.”

“I’ve never seen an emergency response situation up close like that, and I have to say the outpouring of support is outstanding,” Virginia Donkey Rescue’s post stated. “When we walked to the other side of railroad tracks we saw the full impact of the devastation. As far as we could see, there was nothing but debris and what must have been thousands of people, emergency workers, utility companies and volunteers. The sense of community was very overwhelming in the best way.”

Offers of assistance are abundant — local residents offered free rental houses or apartments to those left homeless by the tornado, while the Appomattox Animal Hospital continues to board animals of homeless tornado victims for free.

On Friday the stretch of Route 460 in Evergreen buzzed with activity — from businesses donating labor to church groups bringing food.

“It’s amazing,” Jimmy Womack said of the community and volunteer support. “Everybody pulls together.”

Womack’s home was badly damaged. His mother and uncle’s houses were destroyed.

“This is my mom’s house; it’s been condemned,” he said, pointing at the home next to his. “They’re going to tear it down … This is my uncle’s, and his is also condemned.”

He said volunteers have helped in numerous ways.

One business that provided manpower to clear debris was Areva, a nuclear power company based in Lynchburg.

“Just about all of these people right here are Areva people. They shut down their operation for the last two days (to help),” Womack said.

Besides labor, many groups are helping in other ways. Students in Chef Sandra Hawk’s culinary arts class from Buckingham County High School volunteered with Mercy Chef, a non-profit organization, serving tornado victims breakfast over the weekend at Evergreen Baptist.

“It didn’t look good,” Sam Motley said of what he saw when he got home after the tornado. Motley has been living in the same home in Evergreen for almost 40 years. His home sustained substantial roof damage.

“All kind of different groups (have) been coming in. You don’t even know,” Motley said. “They had a bus load from Liberty University help this morning. And everybody’s just been helping.”

Motley said churches had been feeding the power crews working to restore electricity.

“I came down after I heard about it,” said volunteer Ray Perkins, of Appomattox. “(It’s) the community getting together, doing what they do. It’s tons of volunteer folks. We also work at Areva, and a bunch of these are Areva employees too helping out.”

He said that Commercial Steel Erection Inc. from Madison Heights came and offered their services for free.

”They got the whole crew together. They came out yesterday with cranes, they made over 200 sandwiches for the folks,” he said. “I brought down like 16 cases of water, just, you know, you do what you do.”

The tornado impacted many more than just those living in Appomattox and volunteers. From Buckingham Court House to Toga, residents have reporting finding personal items belonging to the victims.

Danny Elder, who lives off of Route 24 in Toga, said he found a devotional in his woods titled “God’s Promise Book,” belonging to an Evergreen resident. He’s also found sheetrock, a pillow, gutters and pieces of a tin roof on his property, which is about 10 miles from Evergreen.

By Carson Reeher Special to The Farmville Herald Members of the community gathered at the Robert Russa Moton Museum on... read more