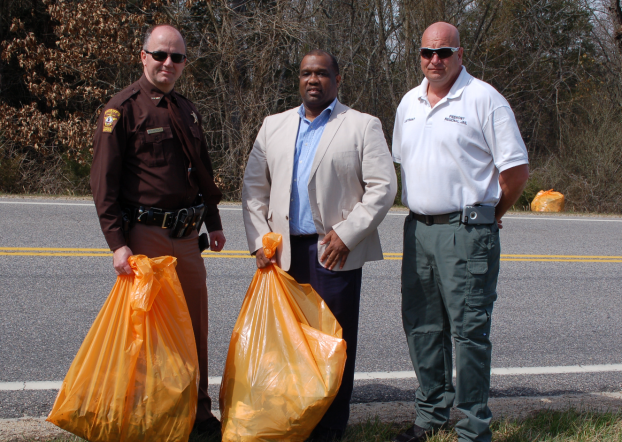 A pilot program among the Cumberland Sheriff’s Office, the Virginia Department of Transportation (VDOT) and Piedmont Regional Jail in Farmville is netting cleaner ditches in Central Virginia.

A new $5,000 grant awarded to the sheriff’s office allows inmates from the jail to pick up litter under the supervision of a sheriff’s deputy — a first-of-its-kind program for the area.

Cumberland County Sheriff Darrell Hodges gives credit for the idea to judge Robert Woodson. “He’s the one who’s been trying to think of something. We partnered with VDOT and we wrote a grant and they were able to assist us by getting the officers out here.”

This is the first year of the $5,000 grant, according to Hodges.

With the help of Donald Hunter, the superintendent of the jail, “They’re able to help us get the inmates out and get us the equipment to use,” Hodges said. “…These guys are busting their butts.”

“What it does is saves us from our staff,” Hunter said of the workforce program, “and it actually it helps the sheriff’s department.”

During the first day of the program, inmates picked up about 73 bags of litter on Route 45 between WFLO Radio Station and Atkins Road.

“So far today it’s been great,” said Lt. David Moore, who works at the jail and supervises the work. “The workforce program itself has been helping out the communities in general. The grant program with the sheriff’s department is helping us out.”

“As far as the jail doing it, they’ve been doing it for years,”  Hodges said of jail personnel supervising the inmate roadside labor. The VDOT grant allows a sheriff’s deputy to supervise instead.

“This is the first county,” Hunter said. “A few others are looking into it, but they haven’t gotten as far as Cumberland County.”

Hodges calls the program a win-win.

“They said they wanted a pilot to see how it goes, and, of course, we’re going to apply for it every year and try to continue on.”

Hunter said the program allows for the inmates to give back to the community.

“To me, instead of them sitting and getting ‘three hots and a cot,’ they’re out here and they’re giving back to the community,” Hunter said. “They’re out here doing jobs. They can see the progress of what they do. And they enjoy to come out here rather than sitting up in the jail not doing nothing or adding on to their time.”

“When we were at New Life (Schools), it was about 30 bags. We’re just into it a couple hours,” Hodges said.