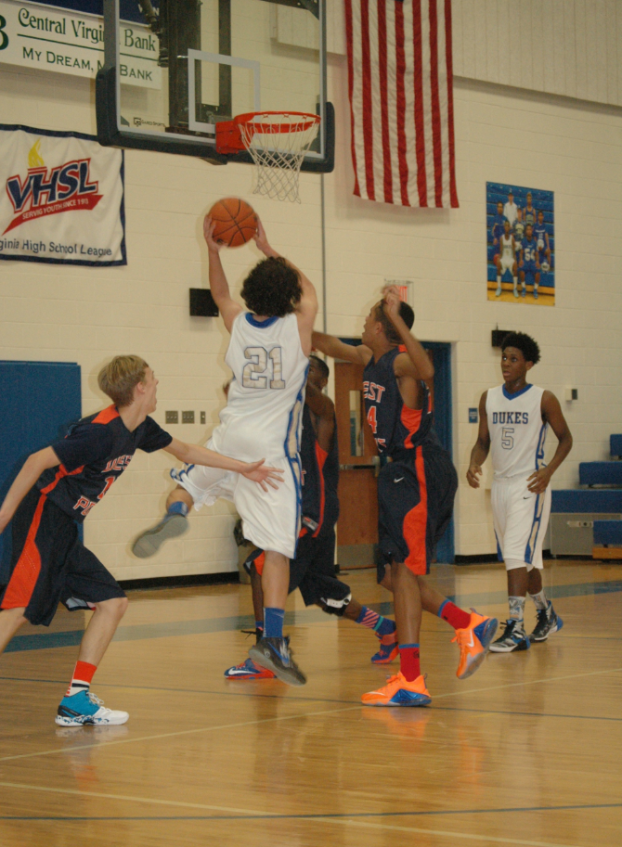 Both Cumberland High School varsity basketball teams were on “Cloud Nine” after winning first-round games in the Conference 42 tournament on Wednesday at home; however, that feeling was crushed on Thursday by their second-round opponents who knocked them out of the playoffs.

The Lady Dukes were defeated 54-20 by Mathews on Thursday, after taking a 56-30 win over Charles City.

The boys team lost 78-58 to Middlesex in their second-round playoff game, which came after they edged West Point 64-60 on Wednesday on their home court.

“We started out slow, and I think we came out a little nervous since we hadn’t played in a week and three days,” CHS varsity girls coach Omar Liggins said after the Lady Dukes win over Charles City.

“We were playing a team we had never seen or played before. But, overall, we got ourselves together and got our heads in the game and the results at the end tell a story.”

The Lady Dukes led the entire first-round game and did not take any mercy on Charles City, which trailed 28-14 at halftime.

Cumberland continued to nail shot after shot in the second half to secure its conference win.

“We got to do better than we did tonight,” Liggins said prior to the Mathews game, which ended the Lady Dukes season. CHS finished 11-9 overall.

The varsity boys team got off to a quick 5-0 lead at the beginning of its game against West Point; however, the game was harder than they expected.

West Point picked up the pace after watching Cumberland gain the first lead of the night. Their hot shooting and height proved to be an obstacle for the team that was fighting without 6-foot-9 post T.J. Jackson.

Cumberland led only by a point after the first quarter, and then rallied to end the first half with a 39-29 lead. The second half would see a fierce battle between the two teams, which ended in Cumberland’s favor.

Standout Ahmad Booker was on fire with his shooting against West Point. He finished the night with a game-high 31 points. Devante Copeland followed with 17 points. De’Shaun Liggins and James Booker notched four points each.

The team then traveled to Middlesex on Thursday where they met their demise and end of their season.

Globetrotters to perform at LU, Two children to be chosen for Junior program