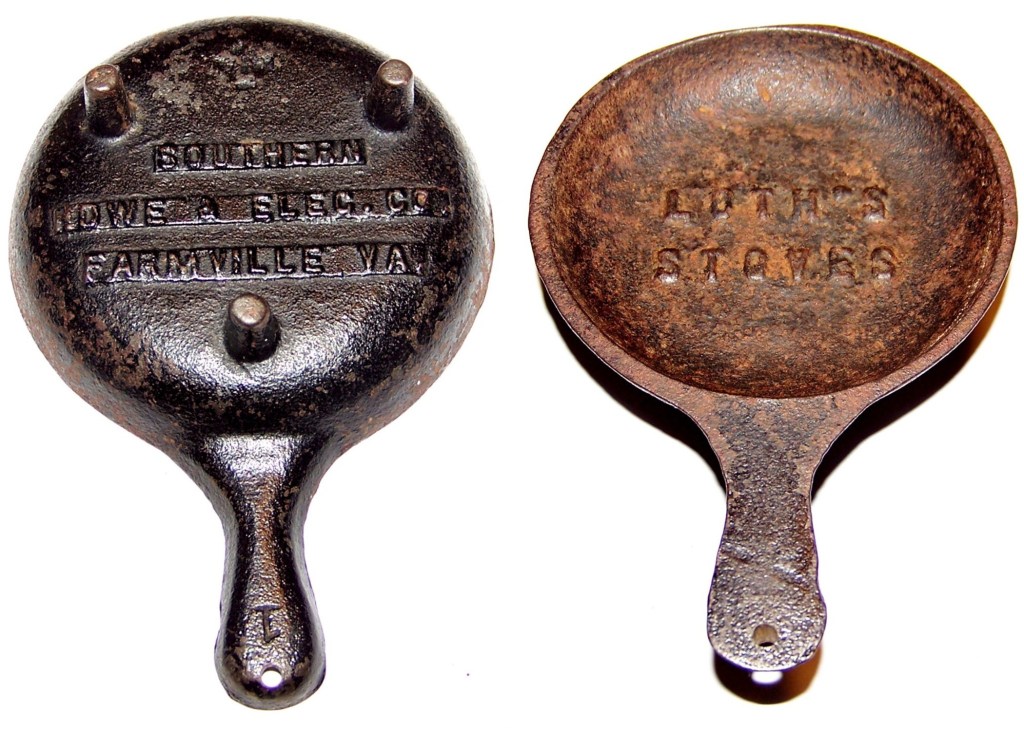 Southern Hardware and Electric Company once gave souvenirs of Virginia Metalcrafters #1 skillet to customers. Loth’s Stove was the original developer of the Hotpoint brand of electric stove which it sold to General Electric.

We recently came across a small VM #1 spider skillet manufactured by Loth’s Stoves now known as Virginia Metalcrafters of Waynesboro. The bottom of the skillet is embossed with “Southern Hdwe & Elec. Co Farmville VA.” Research indicates that these types of embossed skillets were given as souvenirs by various companies at hardware conventions and to customers in the 1940’s and 1950’s.

Frank Percy Loth with his father William J. Loth both of Richmond went into the manufacturing business of cast iron stoves, ranges, and heaters in 1890 and with very limited capital leased a plant in Waynesboro for their Waynesboro Stove Company. They soon added hollowware to their product line and stove repair. By 1904, F. P. Loth had bought out his father’s interest in the business.

As American kitchens began to change with the introduction of electricity into both town and rural homes, so did the stove manufacturing industry. In 1928, Loth’s Stoves developed the electric stove design “Hotpoint.” In 1930 Loth’s was sold to the Virginia Public Service Company, operated by General Electric. Thus the Loth Hotpoint design went under the GE umbrella of brand names.

In 1932 GE sold the Waynesboro foundry back to the Loth Stove employees. In 1938, the company began marketing products made of brass and non-ferrous metals under the name Virginia Metalcrafters.

The 1948 Hampden-Sydney College “Kaleidoscope” has an ad which states, “Southern Hardware and Appliance Co. Sporting Goods, Radios, We Repair Anything Electrical.”

The Prospect Volunteer Fire Department Auxiliary will be hosting its annual pancake supper on Saturday, Feb. 20, from 5 p.m. to 7 p.m. at the Prospect firehouse. The meal will include pancakes, sausage, bacon, apples and a drink. The cost is a donation at the door.

The Glenn Memorial Baptist Church Senior Adult Ministry will host its senior meal Friday, Feb. 26, at 6 p.m. Come out and bring a covered dish or two and a friend to enjoy good food, fellowship, and musical inspiration.

Joel and Franke Coleman from Warsaw, N.C., were visitors of Tom and Katrena Young this past weekend along with their son Tom Young Jr. from Orangeburg, S.C.  They attended the birthday dinner of Howard Ferguson at the Woodlawn, a really nice celebration.

Sympathy is extended to the family and friends of Joyce Beasley Mitchell, James Johnson and  Pauline Patterson.

“Love does not consist of gazing at each other, but in looking outward together in the same direction.” – Antoine de Saint-Exupéry

Storms, fishing and a lesson from Blacky