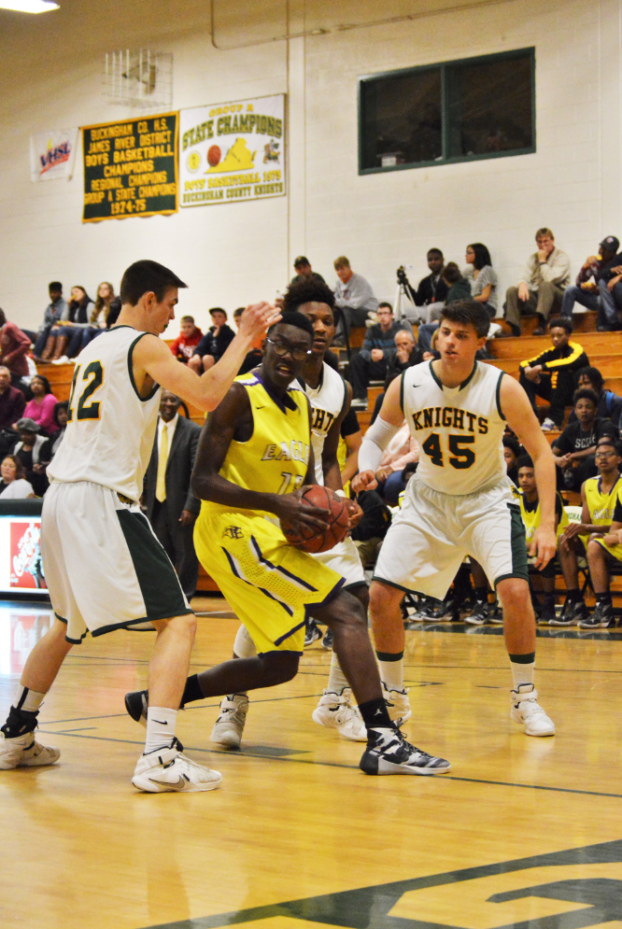 As the buzzer sounded, the Eagles’ dribbling intensified in celebration as the scoreboard read 57-43 on Friday.
In the teams’ first meeting at PECHS, the Knights defeated the Eagles by 14 points, led by a 24-point performance from senior captain guard Leon Ragland and another 17 from junior guard Tariq Gough.

“Buckingham beat us at our place and I knew that at any time they could cut that lead. They are not going to give up, they fight hard until the end. It was a battle,” said PECHS boys’ varsity basketball head coach James Scott. “Everybody got a lot of key points during the game, so I’m proud of the guys as a team.”

This was icing on the cake for Scott, who won his 500th win the night before against Amelia. 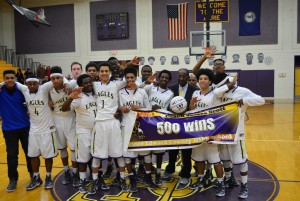 After being sent to the charity stripe 47 times, PECHS swished 64 percent of its free throws. With over half of their points coming from free throws (30), senior guard Marty Blount added ten points from the field.

Blount’s team-leading 14-point effort, combined with junior guard Quantavis Nash’s 12, aided the Eagles. While Buckingham’s Ragland, coming off a 23-point game the night before, shot 36.3 percent from the line and ended with 10 points.

“Free throws (are) something that everybody works on, so you need to hit the free throws and hope that they will continue,” said Scott.

The Eagles exploded at the start of the game, up by 26-6 with over half the second period left. Buckingham left the floor at halftime trailing 34-16.

The Knights returned to the floor to go on an 11-5 run, changing their strategy to focus on shooting from distance. Their shots weren’t falling earlier in the evening. In response, PECHS “had to adjust to that,” said Scott.

“On long shots, you get long rebounds, so (the) transition was there. We didn’t execute a couple of times on the long rebounds, but it worked out,” said Scott.

Senior captain guard B. J. Gough hit two threes, trying to give the Knights the push to close the deficit. The score gap remained in double-digits for the majority of the game.

Aside from being tied 2-2 during the first period, after the Eagles’ initial run, Buckingham could only get within seven of PECHS.

Both teams are within two to three games of entering postseason in their regions.

As the Lancers prepare for the 2016 season, it was announced Tuesday that Longwood’s senior first baseman Connar Bastaich was... read more