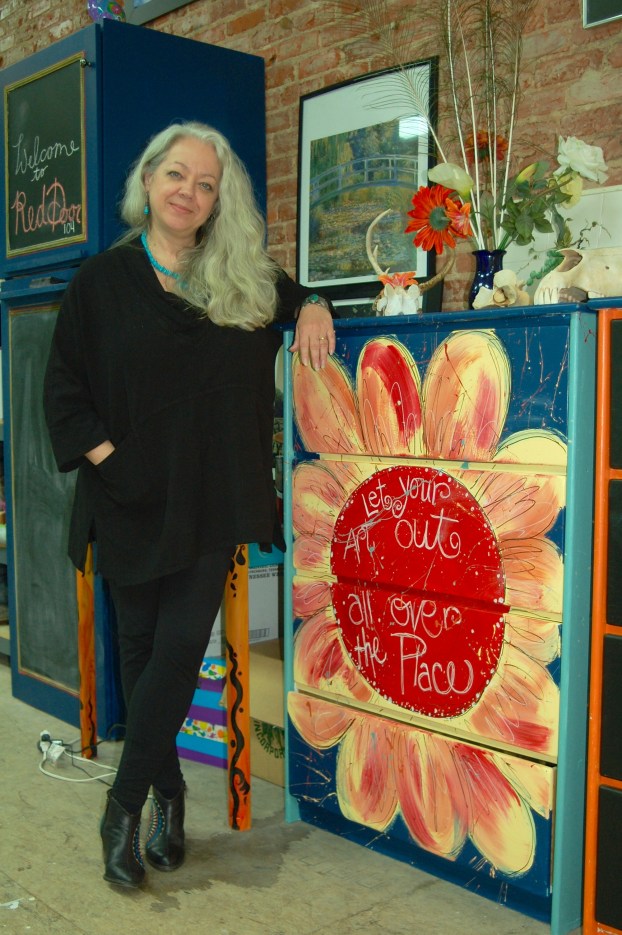 Audrey Sullivan hopes to share her love of art with more local youngsters through the Quentin Wilhelmi Scholarship.

Offering a taste of art

“It’s like a recipe,” Sullivan said. “Anybody can measure one cup of sugar; anyone can measure a tablespoon of flour. Painting is just like that — once you’ve followed all the steps, you’ve finished a painting. Anybody can do it!”

Sullivan firmly believes that art is to be shared. With that in mind she recently announced the establishment of the Quentin Wilhelmi Scholarship Fund to provide art education to local children unable to afford it. 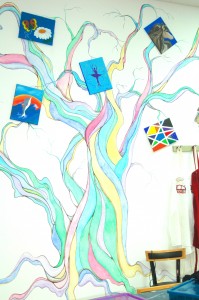 The scholarship is a natural progression for the art school on Main Street in Farmville. When Sullivan and her husband Kent Wilhelmi moved to the area in 2013 to be closer to Kent’s father, retired Navy Capt. Que Wilhelmi, establishing an art center was a primary focus.

The couple purchased a historic downtown building, 104 Main St., and started an intensive restoration process. Constructed in 1922, the building housed many businesses over the years including a shoe shop, pharmacy, millinery shop, recreation center for soldiers in World War II, grocery store, school of dance and a restaurant.

Red Door 104 officially opened last year in May as a center for the arts. Plans to reach out to the community, however, were curtailed with Que Wilhelmi’s unexpected death in August.

“Que and I had worked out the plans for Red Door 104 — and he was going to play a really big part of that, so I guess I’ve let some things slip a little because he’s not here,” Sullivan said.

Part of that plan was to establish a scholarship. 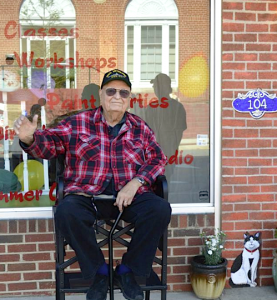 Que Wilhelmi greeted visitors on opening day of Red Door 104 last May. The scholarship, recently established in his memory, will offer art education to local youngsters.

“Very early on Que and I sat at the kitchen table at his farm (near Darlington Heihgts) and talked about goals for Red Door 104,” Sullivan said. “I said to him, ‘I’ve been approached by many people telling me they’d really like to do a class with the kids but they can’t afford it.’ I’ve learned after moving here that this is a very economically depressed area. There are a lot of low-income families here.”

Education, Sullivan explained, was a primary focus in establishing the art center in Farmville.

“I told Que that I didn’t want Red Door 104 to be a place only for people that could afford classes,” she said. “So I asked him — how do we make that a possibility?”

Wilhelmi’s answer was characteristically simple and direct — start a scholarship!

“It was Que’s idea to start a scholarship fund,” Sullivan said. “He said, ‘Let’s go to all the different civic clubs in town and ask for donations.’”

Money is needed for the proposed scholarship program because, as Sullivan explained, she is not the only instructor involved.

“I understand social currency,” she said. “It’s easy for me to say I’ll give a class away, but it’s not okay to give away classes taught by other instructors. That’s where the money comes into play.”

The cost for a full course at Red Door is reasonable: $120 per student.

“For this year I would really like to get five students into the program,” she said.

Sullivan will depend on art teachers in local schools for referrals.

“We’d have to see a portfolio of work and proof of income,” she said.

“The intent was for Que to head the board for the scholarship fund,” Sullivan said. “When Que passed, it seemed very natural to call it the Quentin Wilhelmi Scholarship Fund. He was an incredibly philanthropic individual. He was so excited about what we were doing here.”

Wilhelmi’s civic involvement was extensive. After serving 32 years in the United States Navy, Que and his wife Gretchen moved to Prince Edward County to fulfill their wish “to someday buy a farm.” From their Someday Farm, Que continued to serve with the Darlington Heights Volunteer Fire Department, Farmville Rotary Club and the Military Officers Association of America. He was also instrumental in establishing the FACES Food Pantry in the early 1980s.

Perhaps his most significant service, Sullivan believes, was on the Prince Edward County School Board.

“He really cared about kids and education,” she said. “Education today is leaving out music and art, and Que saw this scholarship as a really special thing to offer. For anyone who believes in the arts — this is a good place to consider donating.”

Sullivan is also pleased that the Wilhelmi Scholarship will keep her father-in-law’s dream alive.

“I do love my job,” Sullivan said. “When people leave here with smiles on their faces and paintings they’re proud of — I know I’ve done my job.”

Part of that job, Sullivan believes, is offering quality art education to all children.

“In my art classes I want to give students a little taste of everything — when you’re 11, you don’t really know what your favorite thing is.”

Helping young people develop a taste for art is all in a day’s work at Red Door 104.

To donate to the Quentin Wilhelmi Scholarship Fund visit www.reddoor104.com.