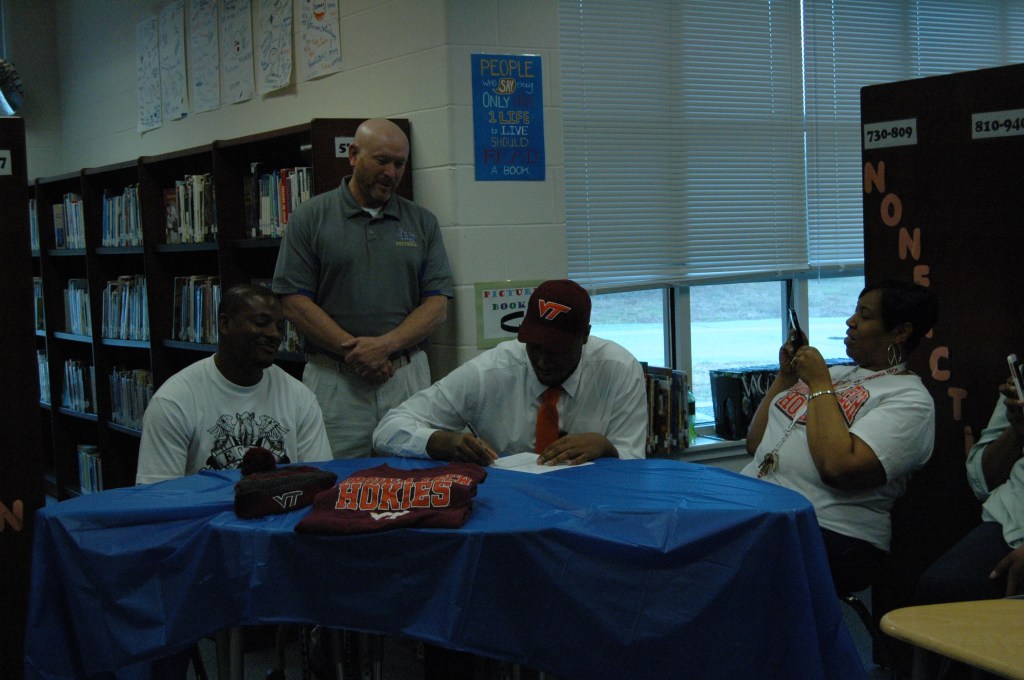 National Signing Day is the first day that a high school senior can sign a binding scholarship contract with a National Collegiate Athletic Association (NCAA) college.

“This is a real big step in my life, and I am not overwhelmed … I am kind of confident and I can’t wait to get there,” said Jackson. “I really didn’t think this was ever going to happen.”

Jackson made his verbal commitment to Tech in December after being offered scholarships by the University of Virginia, Norfolk State, Virginia Military Institute and North Carolina State.

He played varsity football for Cumberland for only his senior year, under Edgar Knapp. Prior to playing at Cumberland, he played football at Wesleyan Christian Academy in North Carolina, and then before at Fuqua School.

Jackson’s mother, Lalita Baker, said her son’s growth has been quite a story, saying, “This has been a journey … a great journey. I’m his first coach and I truly thank God for this experience.” 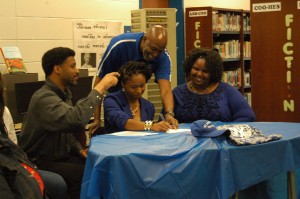 Jackson’s father David Baker agreed with his son’s journey being a unique one, saying, “I mean, we knew he was special. But, he was kind of a goofy kid; always tall and big. We had no idea that this would happen.”

He will be playing under first-year Tech coach Justin Fuente.

“He is with the right coaching staff at Virginia Tech and he is going to do great things,” said CHS varsity football coach Edgar Knapp. “He is one of the finest young men I have ever coached.”

Jones was offered a $20,000 track scholarship by the school and a $10,000 Presidential Scholarship. The school is a member of the Appalachian Athletic Conference under the National Association of Intercollegiate Athletics.

“I’m really excited and just blessed that I have been given this opportunity when at one point no (colleges were) even looking at me, or seeing the potential in me,” said Jones. “I’m upset that my coach (Kenneth Jasey) couldn’t be here, but I know he is proud of me.”

Jasey was not in attendance at the signing due to prior obligations.

She is the daughter of Darren and Tiffany Jones.

“She told me at the beginning of her ninth grade year, ‘I don’t know what I am going to do, but I am going to get a scholarship, momma. You are not going to pay out of pocket.’ And she did, and I cried when she got the scholarship.”

Last season, Jones finished second in the 400-meter dash event at the VHSL Group 1A Conference 44 Outdoor Track & Field championships with a time of 1:02.46

“It’s great,” Ragland said after the signing event. “When I went up there to visit, they were just so pumped and they’re so young and energetic, that’s what I like, you know.” 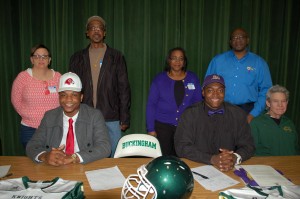 Ragland finished his senior year in style with 209 carries for 2,000 yards rushing, eight receptions for 204 yards and 43 touchdowns.

His senior year aided his high school career, as he finished with 5,208 rushing yards, which is the second most career-rushing yards in BCHS history.

Ragland was named to the Virginia High School League (VHSL) 2A All-State team as First-Team running back.

He was also selected as First-Team All-State running back by VirginiaPreps.com.

Ragland will be playing under head coach Jason Woodman at Fairmont.

“I love it. That’s where I want to go,” Mabry said of his choice. “I stepped foot on campus the first day and I just fell in love with the campus. It’s an amazing place to be. It’s energetic, it’s creative, it’s just where I want to be for the next four years.”

Mabry is the son of Rose and Bradley Gough.

He will be coached by Mike Houston at JMU.

“I think it’s great for them. I’m proud of them,” said Craig Gill, Buckingham’s longtime head football coach. “They put in the extra work in the off season and in the classroom.”

Gill said the two were “probably two of the best we’ve ever had here at Buckingham. They represented our school and community exceptionally well. And not only are they good football players, they’re good people.”

“It’s hard to find people like Michael Mabry and Leon Ragland. And that’s the reason I coach. …,” Gill said. 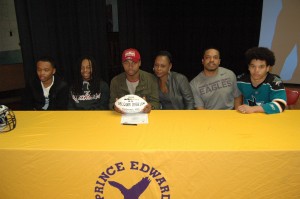 Prince Edward’s Delquan Bigelow signed with Bridgewater College on Wednesday. He was supported by his brothers, mother and father during the event. Pictured are, from left, Marquis Brown, Tyvon Brown, Bigelow, Tina Bigelow, John Robertson and Quantavis Nash.

“Today was just a great experience,” said Bigelow. “I am just happy that I am going to the next level.”

Bigelow rushed for a total of 341 yards and scored five touchdowns in his last two games of the season.

He set the school’s season (2,236 yards) and career (4,240) marks for rushing yards in his senior season, and broke the school record for touchdowns in a season with 32.

“I haven’t cried yet, but I look forward to crying soon. I held it in today,” said Bigelow’s mother, Tina.

“He put in the work and he deserves this,” said PECHS varsity football coach James Ford.

“He is dynamic. He came in a took back seat to another tailback in tenth grade, but he was still our starting back, starting slot. He just took the reins and ran with it … literally. Gosh, I am going to miss him.”

Ford carries a special connection with Bigelow because he played under the same offensive coordinator as Ford did in college.

Bigelow will be coached by Michael Clark at Bridgewater.