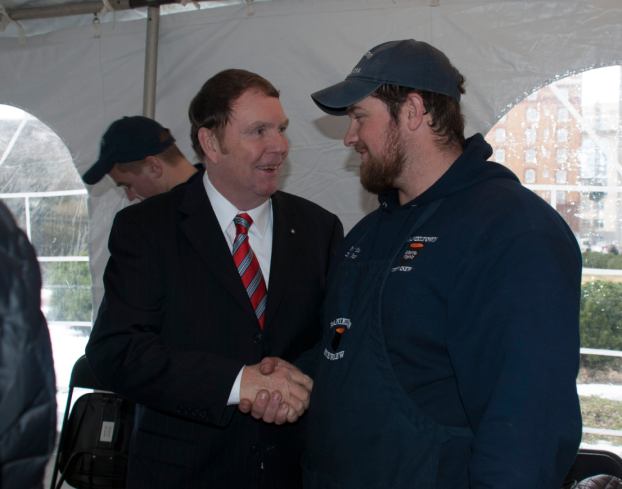 How good was the stew? It ran out fast!

The 80-gallon cauldron of Brunswick stew was empty after just an hour and a half a few weeks ago, feeding members of the General Assembly and Richmond residents who arrived early enough to indulge in the thick, creamy dish.

The spicy and complex aroma drifted from the small tent positioned between the Virginia General Assembly Building and the state Capitol. People didn’t need directions where to go: They could just follow their nose across the Capitol grounds.

“Better get there early,” said lobbyist Mark Hubbard, who did not arrive early enough to receive a bowl of stew and saltine crackers, “And I do work for Brunswick County.”

The General Assembly officially established Brunswick Stew Day on the Capitol grounds in 2002 by passing House Resolution 2. It was sponsored by Del. Tommy Wright, who is from Lunenburg County, Brunswick’s next-door neighbor.

Wright dropped by the tent to stir the pot, literally, and of course enjoy a cup of stew.

“We all at the General Assembly really look forward to this,” Wright said, smiling. “We intend on doing this forever.”

The stew is free to the public but mostly serves state legislators. Several pounds were packaged to take directly to the House and Senate.

“I think we needed two pots this year,” said volunteer Bernard Jones, a member of the Town Council of Lawrenceville, the seat of Brunswick County. Jones said this is the first time in his 12 years of volunteering at Brunswick Stew Day to see the stew run out so quickly.

Brunswick Stew Day features the first-place winner from the Taste of Brunswick Festival, which is held every October in Brunswick County. Last October, Clark Bennett received that honor (for the second time).

The winning stew crew from the Taste of Brunswick Festival receives a small cash prize and a large wooden paddle to stir the pot. The winners also cook their recipe for the General Assembly on the fourth Wednesday in January during its legislative session.

The Taste of Brunswick Festival can have more than 30 stew crews competing, and every year the winning stew tastes different. B.K. Roberts, Brunswick County’s sheriff for the past eight years, is also a stew judge. At last fall’s festival, Roberts voted for Bennett’s stew crew because “it packed a little heat” — a quality the sheriff especially appreciates while judging stews.

Bennett’s father, Billy, who was also a stew master, tragically died in a car accident in 2004, but Bennett has pushed forward and continued his father’s culinary legacy. On a banner in the tent the Danieltown Stew Crew dedicated the stew “in loving memory of Billy Bennett.”

Bennett would not disclose his secret ingredients. While cooking, he meticulously watched the stew for any imperfections, such as bruised potatoes or clumped spices. He would point them out, and one of his three sous-chefs would remove the offending items with a cooking tong. Bennett wanted his stew immaculate.

Drama unfolds beneath theater — Archaeologists uncover evidence of Farmville’s past

When people think of an archaeological dig, they usually picture a desert or a farmer’s field or someplace deep in... read more