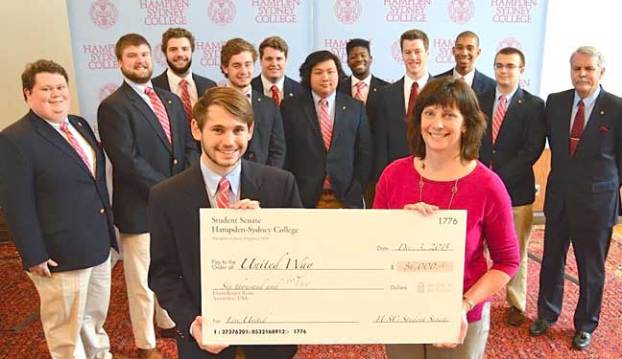 A T-shirt sale at Hampden-Sydney College raised $6,000 for the United Way of Prince Edward County.

“I was so happy to hear that the students raised so much money. It was unbelievable,” Director of Student Affairs Operations and Civic Engagement and United Way board member Sandy Cooke said. “They have done something really great for our community.”

The 11-member student senate, which sold long-sleeve T-shirts as a fundraiser, was recognized during the United Way’s meeting with its partners in H-SC’s College Church fellowship hall.

“Definitely ahead of where we were last year this time,” United Way President Rucker Snead said. “That’s huge.”

As for meeting its goal for the year, “We’re definitely on track,” he said.

The United Way is the world’s largest privately funded nonprofit, engaging people from all walks of life in nearly 1,800 communities across more than 40 countries and territories. Among its partners are global, national and local businesses, nonprofits, civic and faith organizations, as well as educators, labor, health organizations and governments.

Locally, the community partners United Way supports serve a cross section of the community — with no regard to age, race or gender but for there being a need.

On Wednesday at 7:30 p.m. in Crawley Forum, Hampden-Sydney College will present Lise Keiter performing as part of the Hampden-Sydney... read more