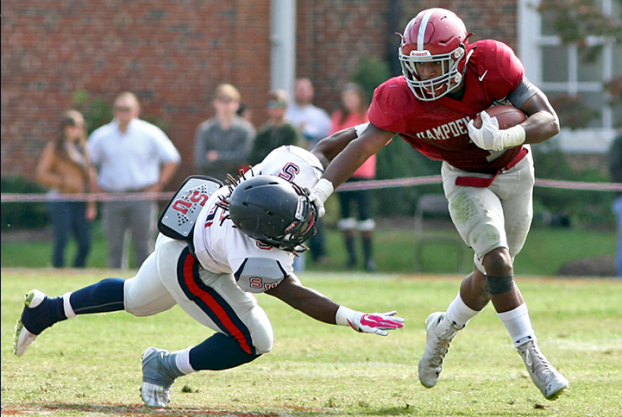 On Wednesday, Hampden-Sydney College spoke out on the arrest of student-athlete Kyree Koonce.

Koonce, 19, of Buckingham, was arrested and charged on Feb. 19 with distribution/possession of marijuana with intent to distribute between a half-ounce and 5 pounds.

“The college is saddened by the arrest of our student Kyree Koonce,” college spokesman Dr. Lee King said. “While we cannot comment further on issues involving our students or disciplinary matters involving them, the charge for which Mr. Koonce was arrested is very serious and of a nature for which Hampden-Sydney has no tolerance.”

The charges originated in Buckingham, according to the Buckingham County Sheriff’s Office arrest report.

Koonce graduated from Monticello High School in 2015. He then was recruited to play football for H-SC. In his first season as running back, Koonce led the Old Dominion Athletic Conference in rushing yards (1,313) and the H-SC team in touchdowns (12). His 12 touchdowns topped the ODAC charts as second-best this season. Koonce was also named the ODAC Rookie of the Year in November and was a Lanier Award finalist.

Stay with The Herald for more updates on this case.

MY START: My dad swam in high school and college, and he kind of pushed me to swim as a... read more