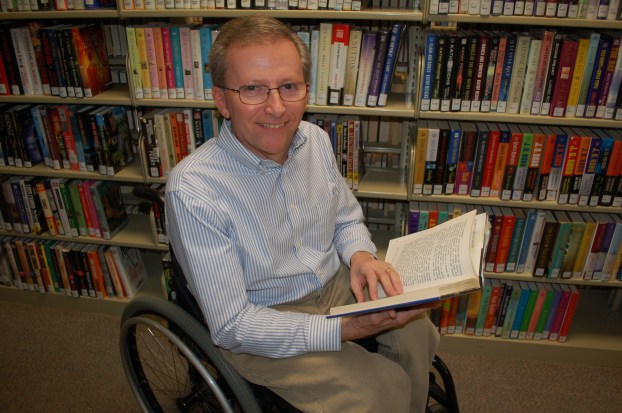 Rick Ewing is the new librarian in Buckingham.

Rick Ewing has been named branch manager of the Buckingham County Public Library in Dillwyn.

The 57-year-old comes to the geographic heart of Virginia from Akron, Ohio, after working for 26 years at the Akron Summit County Public Library.

“I did a little bit of climbing,” he said of his career track. “I started out as the manager of their A/V department, and then I was there for about 12 years, and about 14 years as the head of the main library.”

The library Ewing worked at was one of 17 branches. The library he supervised had a circulation of about 2 million books — about half of the entire system’s circulation.

For the past five years, he’s been taking care of his mother, which took him from the business temporarily.

“My wife and I moved from Akron to New

Jersey,” he said of leaving the Ohio library.

Ewing grew up in New Jersey, and graduated from the University of North Carolina. After graduating, he took a job in Akron at the library.

“I grew up going to the library a couple of times a week, and worked in a library in high school,” he said. “And spent a lot of time in the library in college.”

One of the librarians at college suggested he study library science.

“It grows on you,” he said of working in libraries. “You start as a librarian, your first job. Then you realize that it’s not quite like just sitting around reading books and checking out books. There’s an awful lot to it. You sort of dig into it. You realize how important the work is and what an impact you can make in a community.”

And speaking of community, Ewing’s first goal is to get to know the one in Buckingham.

Another one of his goals is to work getting a new library for Buckingham, he said, along with connecting with the community and attracting more people to the library.

“Hopefully they’ll learn what we can do for them, because we can do things that they can’t get anywhere else. We can help them.”

Ewing wants to continue and expand the library’s programming, including computer instruction, children’s offerings and activities, and work with the schools in different ways.

“I’m surrounded by great people,” he said, noting the Buckingham Friends of the Library Group and the Central Virginia Library Board.

“The library plays a crucial role there, but I would argue that, in Buckingham County, the library is more important, because you can’t go elsewhere and get what you need. You have to come to the library.”

“We’re very fortunate with a person of his background and experience in other places,” said friends group president Spencer Adams. “It’s very seldom that you’re able to obtain somebody with that training and background in a rural setting, so I’m very pleased, and I think he’s going to be really good to work with.”

A reception welcoming Ewing to the community will be held at the library on Main Street on Saturday from 1-3 p.m.

On Saturday, Hampden-Sydney College officials broke ground on a new student center on the grounds of the college. “The Brown... read more