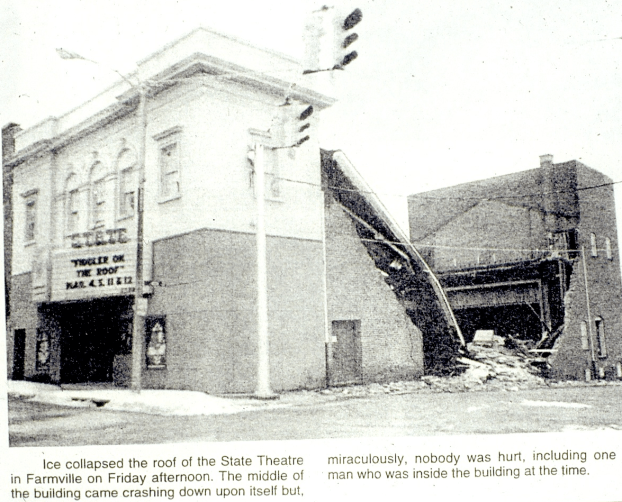 A front-page photo from The Farmville Herald (Feb. 16, 1994) shows the collapsed roof of the State Theatre. Notice the play on the marquee: “Fiddler on the Roof.”

Drama unfolds beneath theater — Archaeologists uncover evidence of Farmville’s past

When people think of an archaeological dig, they usually picture a desert or a farmer’s field or someplace deep in the woods. But there is an archaeological site on Main Street in Farmville that you no doubt pass every time you come to downtown. We call it the Crute Stage, at the corner of Main and Fourth streets, the grassy spot where folks bring their lawn chairs for the Summer Outdoor Film Series.

For 72 years that lawn and open-air stage was a theater, first called “The Eaco” and later “The State Theater.” For three quarters of a century it was a hub of social activity in Southside Virginia, as a theatrical playhouse (the first production on April 21, 1922, was “The Four Horsemen of the Apocalypse,” admission $1), a meeting hall, a movie house, a dance hall and a school. That all ended on Feb. 10, 1994, when an ice storm struck Farmville and the building fell under the weight on its roof. 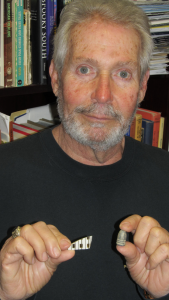 Dr. Jim Jordan holds a fragment of Professor Knauff’s “piano key” dinner plate and a Civil War Minie ball that Dr. Robertson may have removed from a patient.

Over the next several months, an unusual transformation took place — led by anthropology graduates Brian Bates and Bob Flippen, my students in the Longwood Archaeology Field School turned the fallen structure into a dig site that produced the most surprising finds!

The Waterworks Players, who owned the land, allowed us to explore what was buried under their theater all those years — and no one had the slightest idea the shock that digging would produce. We uncovered the remains of two houses, one sitting on top of another like a two-layered cake. The upper house was a physician’s office from the time of the Civil War and the bottom house was a piano teacher’s studio from the 1830s.

The Farmville doctor was Dr. William Henry Robertson, born in 1829 in Amelia County who served as a surgeon in the Confederate Army. He was captured by the Yankees and held as a prisoner of war and when released, he established his medical practice and home at the corner of Main and Fourth streets on the lot that became our State Theater. 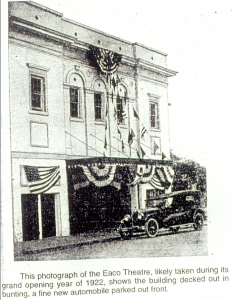 The Eaco Theatre was the cultural center of Farmville in 1922.

In the remains of his house we unearthed many artifacts.  Some of those were from his physician’s office — Bitters Bottles, tags from medicine vials, wooden stamps, and a handle of a knife (perhaps a surgical tool).  Some artifacts were from his household – clay marbles played with by his children, fragments of expensive table china, the handle of a shaving mug, and shards of wine bottle glass.

The most exciting find was a Civil War Minie ball. We debated for hours about whether it may have been lost from the rifle of a soldier passing through Farmville. Or did Dr. Robertson remove it surgically from a patient!

But there was an even deeper mystery than the Civil War bullet as we soon discovered — under Dr. Robertson’s house was another building buried deeper in the ground!  It was the piano studio of Professor George P. Knauff.  We located in the records in the Prince Edward Courthouse this entry: “to be built by Hawkins and Company for Geo. Knauff on lot 5 a house with underpinon walls, three good chimneys in workmanlike manner, to be plastered inside to house 2 new pianos and 10 used pianos” 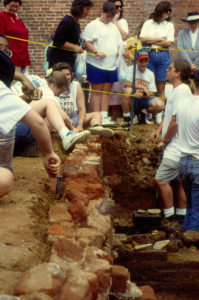 In this building, Professor Knauff instructed “the ladies of the town in music but was often disabled since he was found frequently deep in his cups.” The good musician kept his studio from September 1832 until he left Farmville deeply in debt in 1840. He then began teaching at the Buckingham Female Institute.

Professor Knauff left behind some items in his escape from his creditors.  In his basement we found broken chandelier glass and shards of expensive porcelain plates and cups and, in the music archives of Longwood University (where he taught the very first year of the existence of that institution, then called the Farmville Female Seminary – 1839), we located sheets of several of his musical compositions.  They were titled “Virginia Cotillion,” “Colonel Hubard’s March” and “Amelia Springs Cottillion.”

The most touching artifact of this early Farmville musician, I think, was a broken piece of a dining plate that has hand painted decoration on it resembling black and white keys on a piano.  Truly, music must have been everything to Professor Knauff.

As you drive down Main Street in Farmville, it is hard to believe, that Dr. Robertson in 1865 and Professor Knauff in 1832 and those first State Theater patrons in 1922 were all actually there in their day. But they were  — and their archaeological remains prove it.

In a true sense we, reading this issue of The Farmville Herald, share our town with these spirits of the past. While they were here first we are the most recent link in a chain going back to 1798, the year Farmville was founded.

The next time you walk down Main Street perhaps you’ll feel like someone is watching you as you stroll by — maybe it’s Dr. Robertson or Professor Knauff.  Remember they too called this very place home.

DR. JIM JORDAN is professor of anthropology at Longwood University. He can be reached at (434) 395-2244 or www.jordanjw@longwood.edu.