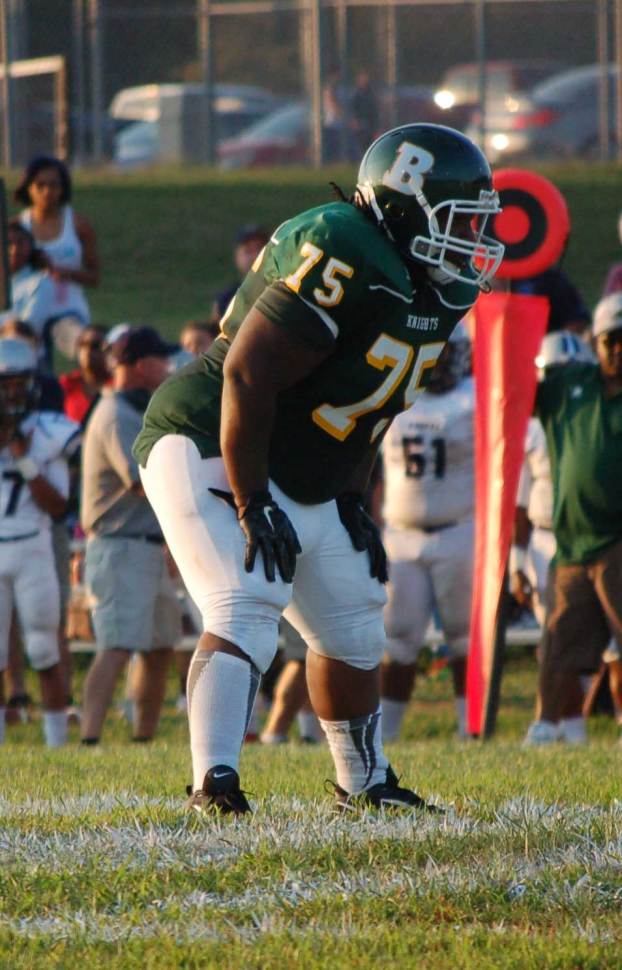 Perkins was a 269-pound offensive lineman on the Knights varsity football team. He served as a team captain for two years.

A 19-year-old Buckingham County High School senior, who twice served as a captain of the varsity football team, is dead after reportedly attacking a sheriff’s deputy in the 800 block of Penlan Road near Arvonia on Saturday.

Dyzhawn L. Perkins died at the scene after sheriff’s deputies shot him, according to Virginia State Police spokeswoman Corinne Geller.

Perkins allegedly attacked two people inside Faulknier Country Store and assaulted an elderly couple before being shot at a residence at 846 Penlan Road.

The incident that led to the shooting was reported shortly after 1 p.m. when deputies were called to a home for a combative male on Penlan Road, Geller said.

“When two deputies arrived, Perkins jumped through a plate glass window and attacked one of the approaching deputies. The deputy was knocked to the ground. Perkins, now on top of the deputy, continued to fight the

Before the Penlan Road incident, state police responded to Faulknier Country Store in the 13300 block of South Constitution Route, State Route 20, where Perkins was reportedly “yelling and attacking two people inside the store,” Geller said.

Moments before troopers arrived, she said, Perkins fled from the store and broke into a nearby residence “where he assaulted an elderly couple.”

Leon Ragland, who played football with Perkins, said “something really had to happen for him to spaz like that. That’s not him, so something crazy really must’ve happened for him to be that way. It’s unreal.”

“I just can’t comprehend that. It seems like a bad dream,” said head varsity football coach Craig Gill, who coached Perkins for five years. “It just seems out of character for him, because he was always so having a good time, laughing. He got along with everybody at the school.”

Perkins’ body has been transported to the Office of the Chief Medical Examiner in Richmond.

“The deputy was transported to (the) UVA Medical Center for treatment of minor injuries,” Geller said.

“The Virginia State Police Bureau of Criminal Investigation’s Appomattox Field Office responded to the scene to investigate the shooting,” she said.

“We had him pretty much hooked up with Virginia Union (University) to school and play ball,” Gill said.

Perkins was set to take the SAT this week, Gill said. “All they needed was an SAT score. They were going to sign him,” he said.

“He was always … just having a good time with the young men. (He) got along with everybody. (He was a) great leader on the football team … He was a team leader. The kids rallied around him.”

Gill said Perkins never missed a workout or a practice.

“This is just so surprising for me,” Gill said. He said the school has lost one of their favorite students. “He always had a smile on his face … He was a joy to coach and a joy to be around. It’s just got me dumbfounded here.”

“I talked to Dyzhawn more while he was in high school than when he played for me,” said Joe Marsh, a longtime youth league football coach. “I always thought he was a really nice kid and he always gave me respect. I watched him on the football field and wish he had developed the skills in youth league a little quicker as he was a heck of an offensive lineman for the varsity football team.”

Ragland said Perkins was a good guy, “always laughing, always down for battle.”

“It’s crazy to think about. We were just having a serious (conversation) Thursday about life in general,” Ragland said. “He had my back on the field since sophomore year.”