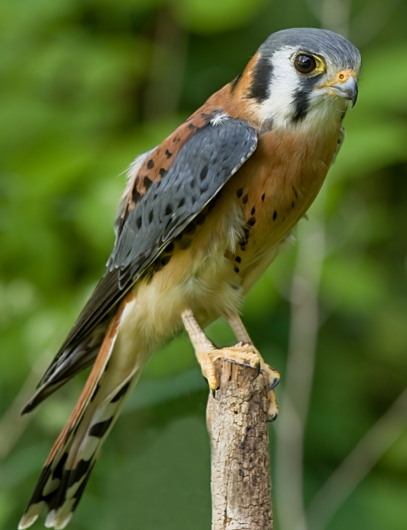 The Margaret H. Watson Bird Club cordially invites the public to its regular meeting Thursday at the Farmville-Prince Edward Community Library beginning at 6:40 p.m. with light refreshments; the meeting will begin at 7 p.m. and will feature a program on the American kestrel, the smallest falcon in North America.

Entitled “If We Build Them, They Will Come,” the presentation will describe the efforts of two members of the Virginia Society of Ornithology, Patti Reum and Mary Ames, to combat the decline of kestrels caused by loss of grassland habitat, loss of nesting cavities and use of insecticides and pesticides on agricultural fields.

The American Kestrel Nesting Box Project has a goal of providing nesting boxes in suitable habitats where kestrels are found throughout Virginia.  The presentation will include photographs of the project and present information on the habitat and biology of this fascinating and valuable species.  The details fledgling monitoring program of Reum and Ames will be described. This protocol will determine nesting success of kestrels using their boxes, as well as the success of the boxes themselves in attracting kestrels to them.

The American kestrel hunts by hovering over fields or by perching in nearby trees and scanning the area for prey.  It catches grasshoppers, lizards, mice and small birds like sparrows.  It nests in cavities, principally in trees or on cliffs, but has been known to nest in nooks and crannies of tall buildings.  It has a vast breeding range, extending from western Alaska across northern Canada to Nova Scotia, and south throughout North American to central Mexico.  This species has been documented frequently in the countryside surrounding Farmville by the Margaret Watson Bird Club.

Reum has been involved in many bird projects in Virginia, including the Golden Chase Project working with biologists at the Center for Conservation Biology.  This project fitted a telemetry device to “Virgil Caine,” a golden eagle whose migration was followed for four years by many Virginians who donated to the study.  She has also assisted in golden-winged warbler research conducted by Virginia Commonwealth University.

Reum has been a wildlife biologist in Canada, Maryland and Virginia.  Both Reum and Ames are retired educators. Ames, a member of the Margaret Watson Bird club, loves spending time outside enjoying birds and nature in general.  She has vowed to make her retirement an outside adventure as much as possible.

Katy Overby will present  “Vegetable and Herb Gardening in Containers” for the Thursday Lunch and Learn Series. The program will begin... read more