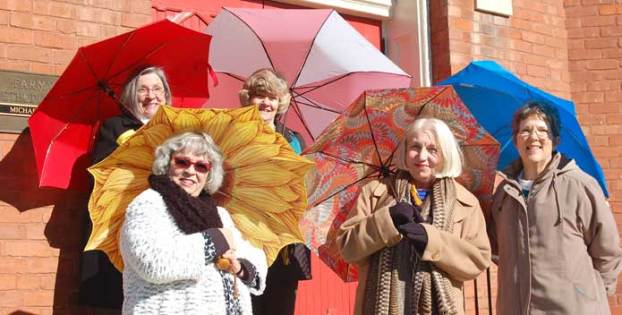 What do Farmville United Methodist Women (UMW) and Super Bowl 2016 have in common? The answer is traffic. While Super Bowl organizers make plans for this weekend’s high-traffic event, UMC groups across the country will be rallying to combat traffic of another kind — human trafficking.

The UMW’s “Open your Umbrella” campaign is designed to form a virtual umbrella over victims of human trafficking.

“The Super Bowl ranks second only to Thanksgiving as the day on which American consume the most food,” Susie Johnson of the UMC Washington office of public policy said. “Some of those who are trafficked will serve food in restaurants or catered parties related to the Super Bowl. Others will clean hotel rooms, wash dishes, tidy nail salons, deliver dry cleaning or wash windows. Some will be trafficked as sex workers for escort services.”

“We were shocked to learn that it happens in the United States,” social action coordinator for Farmville UMC Valerie Montgomery said. “It isn’t just happening to someone in far-off East Asia. It’s young people here in the U.S. who are lured under false pretenses.”

According to a December 2015 press release from Attorney General Mark Herring, Virginia is considered vulnerable to human trafficking because of its location on the East Coast, international air and seaports and the large number of major interstate highways. Through September 30, 2015, the National Human Trafficking Resource Center’s hotline received more than 490 calls referencing 112 reported cases of human trafficking in Virginia. Around 80 percent of the cases involved women, and at least 35 cases involved U.S. citizens. Sex trafficking accounted for 71 percent of cases with forced labor adding another 22 percent.

“It does happen to middle-class girls — and boys, too,” Montgomery said. “It can be something as simple as a young girl having a conversation on the Internet. Someone says, ‘I’m a 15-year-old boy,’ and, of course, they’re not. It’s a gradual process, but once you’re trapped, you’re trapped.”

Montgomery cited a case that occurred in a Richmond truck stop last year.

“There was a young woman staring forlornly out of a truck window,” she said. “Somebody felt something wasn’t quite right and called the police. As it turned out, the young woman had been abducted on the West Coast, and they’d been torturing her the whole time.”

The “Open your Umbrella” effort, Montgomery explained, is to raise awareness about such situations.

“They tell us just to be aware,” she said. “If you are out somewhere and see something that just doesn’t seem right, then call 911.”

“I always tell people to call us if they see something they’re uncomfortable with or that causes concern,” Farmville Police Chief Curtis Davis said.

The most important thing, Davis added, is for people to record information about what they observe.

“People need to give us as much information as possible, like a tag number or description of a vehicle,” Davis said. “Certainly any time we’re called and asked to look at something like this we’re going to investigate.”

Davis noted that there are different levels of human trafficking.

“You may have a runaway that’s voluntarily with someone,” he said. “But still, it’s illegal.”

Davis added that any effort to bring attention to a problem such as human trafficking is a good thing.

“It’s always a difficult decision, but you should err on the side of caution,” Davis said. “There’s that one chance you might be able to save someone, so keeping it in perspective is important.”

Why, many may wonder, don’t victims of human trafficking who are held in forced labor simply leave.

“There’s a fear,” Montgomery said. “If someone says, ‘I’ll kill your children if you tell the police,’ you probably won’t do it. It takes a lot of courage to break free.”

For that reason the United Methodist Women chose an umbrella as a sign of safety.

“Under an umbrella we are shielded from the storm,” UMC’s Johnson said. “Our umbrella forms a colorful ribbon of hope to show human trafficking victims we care.”

Many United Methodist Women, in fact, will be on the streets of San Francisco Sunday, opening their umbrellas as a sign of defense and hope.

The UMW’s human trafficking campaign, despite who wins Sunday’s game, will have made its point.

Three fire companies were called to the scene of a reported structure fire at 506 Longwood Avenue at about 3:20... read more