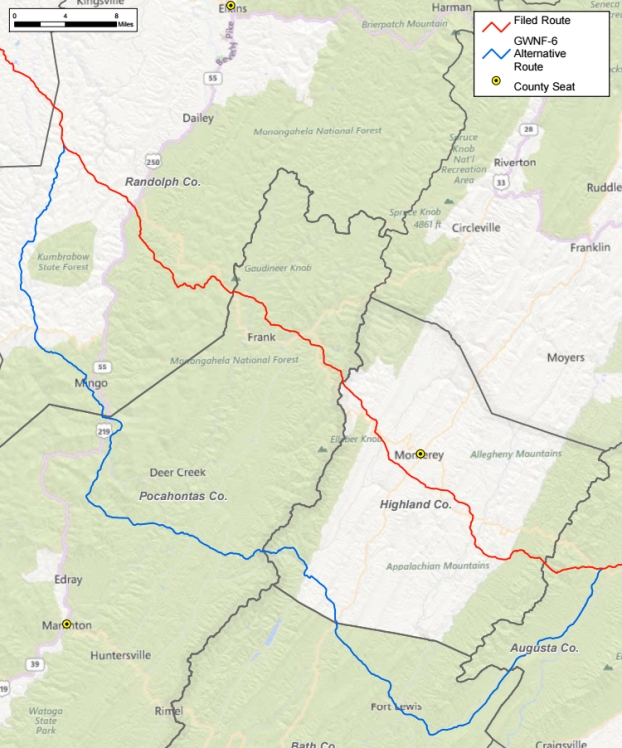 Atlantic Coast Pipeline, LLC (ACP) has announced an alternative route that avoids sensitive areas in the Monongahela National Forest and the George Washington National Forest. According to Dominion spokesman Aaron Ruby, the ACP — a joint venture being led by Dominion, seeking federal approval of a natural gas pipeline — worked with the U.S. Forest Service over the last several months to identify the alternative route.

According to Dominion spokesman Aaron Ruby, the ACP — a joint venture being led by Dominion, seeking federal approval of a natural gas pipeline — worked with the U.S. Forest Service over the last several months to identify the alternative route.

“As a result of these extensive consultations, next week Atlantic will formally adopt an alternative route that we believe will meet the Forest Service’s requirements and provide a viable path forward for the project. Finding a viable route through the national forests is an important milestone for the project and would allow the Federal Energy Regulatory Commission (FERC) to continue its environmental review,” Ruby said.

According to Dominion, the alternative route was selected to avoid Cheat Mountain and Shenandoah Mountain because of certain species that inhabit those areas, as specifically requested by the Forest Service. “The route will reduce total mileage in the national forests by more than one-third, from 28.8 miles to 18.5 miles.”

In late January, the Forest Service formally denied ACP’s application for a special use permit, based on the proposed route’s likely impacts on the Cow Knob and Cheat Mountain salamanders and the West Virginia northern flying squirrel.

“The Forest Service’s regulations and the relevant forest plans prohibit the agency from authorizing any activities that would harm those rare and endangered species. It rejected ACP’s contention that using a technique called horizontal directional drilling to go under Shenandoah Mountain would avoid these impacts,” an Appalachian Mountain Advocates release stated.

Ruby said the ACP is contacting landowners along the alternative route to request permission to survey their properties so the route can be thoroughly evaluated. “Atlantic will submit a preliminary analysis of the route to the FERC next week, and plans to hold a series of public informational open houses along the route in early March.”

On Monday, members of the EnergySure Coalition, a diverse group of 189 businesses, labor organizations, and other local, state and... read more