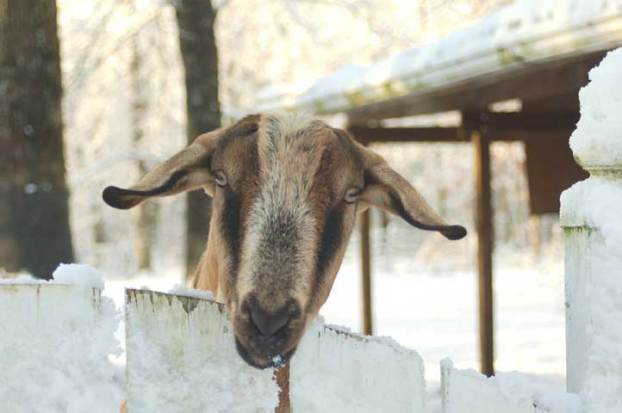 Healthcliff is ready for some winter games.

Snow finally arrived this week at Elam, and the winter games are on.

While the next Winter Olympics aren’t scheduled to begin until 2018, the goats are ready for some snow day games.

Goat games usually begin at the crack of dawn — a good choice of words for days starting with temperatures barely cracking the 20-degree mark.

It’s easy to see why farm work is referred to as “chores.” It’s a real chore to get into the necessary winter attire — knee-length boots, overalls, sweater, sweatshirt, barn coat, gloves, (plural, as in two pairs) earmuffs, muffler and hat.

As padded as the Michelin Tire Man, I shuffle out the door. At least if I fall on the ice I’ll roll or bounce back to the house.

Padding along the slippery path to the barn I experience the frosty morning from the inside out — my fingers are already turning to icicles (despite two pairs of gloves). The only living creature in sight is a redheaded woodpecker in an oak tree beside the pasture (at least I think the pasture is still under all that ice and snow). His long pointed beak hits a frozen branch with a sound that jackhammers the frigid air. I wonder if the air might “crack” along with the dawn.

The goats are up (as goats usually are) and ready for maid service. After I muck out the stalls (muck rhymes with “yuck,” and there’s a good reason for that) and put down fresh bedding the goats are ready for breakfast — pans of grain mixed with corn, fresh pads of hay, and two buckets of warm water.

“Let the games begin!” Heathcliff nods with a shake of his beard and a pointed look at the snow shovel.

The “snow-bored” (as in really tired of the white stuff) competition is about to begin.

Attempting to make paths though the snow for the goats, I advance 2 feet, then stop to remove four feet (attached to almost as many goats) from the shovel.

A snow shovel is not a snowboard I try to explain.

My “snow-bored” friends are having too much fun jumping around me and bouncing off the shovel to listen.

The goats also enjoy another Olympic event popular at the 2014 games in Sochi, Russia: short track speed skating. This is becoming my specialty. My version puts me on the fast track to a very short track — for my barnyard friends, that is. With so many goat helpers I’m not making much progress through the snow.

While Heather and Heathcliff practice their short track skills by running laps around the paths I’ve made (whether I’m standing in them or not), Claude works on another winter game skill. He’s perfecting his own version of another Olympic favorite: curling.

Curling is a winter game played on ice (our pasture certainly qualifies). Each team has four players; two sweep the ice while the others “curl” a stone toward a designated tee or “house.”

A goat play-by-play goes something like this: “Claude and Claudine take the lead with Heather and Heathcliff close behind, high tailing it (which goats do quite well) toward the goal. It’s a race to the finish, folks — no ifs or ands — but quite a few butts!”

Heathcliff is first to hit the target, a tree not a tee, but close enough. He acknowledges victory in typical goat fashion with a curl of the upper lip and a big horsey grin.

There you have it — curling!

I probably shouldn’t be disclosing this information — it’s a real winter sport exclusive: the sport of curling was actually invented by goats.

I’m not a sports writer by any means, but I have this information straight from the horse’s mouth, or the next best thing — a goat named Heathcliff with a big horsey grin.

MARGE SWAYNE is lifestyles editor for The Farmville Herald. Her email address is marge.swayne@farmvilleherald.com.

The American Red Cross urgently needs blood donors to make an appointment to give this winter. Eligible blood donors of... read more